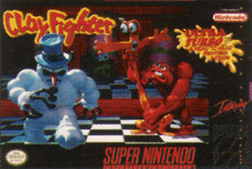 ClayFighter is a fighting game released for the Super NES in 1993 and later ported to Sega Mega Drive/Genesis in 1994. It was later released on Nintendo's Virtual Console.

Most of the game features a circus theme focused more on humor than serious gameplay. It features claymation-style graphics that were created by photographing and digitizing actual clay models.

The game was one of the two "clay" themed game franchises made by Interplay, the second being a platformer titled Claymates.

Eight clay freaks dream of ruling the circus, but only one can be king. So they're willing to fight it out with each other, to see who is the strongest and should be crowned King of the Circus. You must choose sides, become one of the freaks, and fight for this honor.

Clay Fighter's name comes from its distinctive graphics, as all the characters are clay figures with animation coming from stop-motion claymation captures. You can select from eight clay fighters with names like Ickybod Clay, Bad Mr. Frosty and Blue Swede Goo. Each of the game's freaks has a list of special attacks, executed via joystick and button sequences, to bolster its regular attacks.

Instead of the decreasing timer in most other fighting games, Clay Fighter uses a bomb with a slow burning fuse to keep track of round times. A fighter must defeat its opponent before the fuse burns out, by using attacks in any combination to completely drain the opponent's health bar. Fighters have to win two out of three rounds before being able to advance to the next opponent.