Boxing Legends Of The Ring SNES 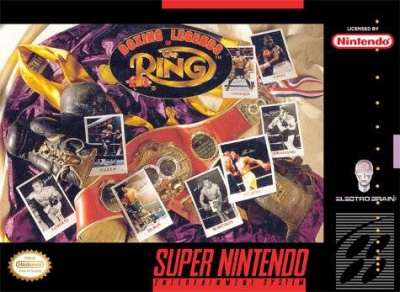 Boxing Legends of the Ring is a boxing game, developed by Sculptured Software and published by Electro Brain. During fights, it is possible to keep track of the participating boxers' wellbeing by observing the small portraits of the fighters' faces at the top of the screen. As the fighters receive punishment, these portraits show injuries such as cuts and bruises, the severity of which indicate the fighter's health (or lack of). There is also a boxing glove shaped meter at the top of the screen, that indicates how much power a boxer has left in his punches (as in a real fight, the more punches boxers throw, the more tired they become, resulting in weaker punches). The fighters movement about the ring is limited to side-stepping left or right; it is impossible to step back or forward. A variety of punches can be thrown; left jabs, crosses to the head, hooks to the body, and uppercuts to the head (all punches except jabs can be thrown with either hand). It is also possible to throw a limited number of so-called 'super punches', that are essentially either a right cross or a right uppercut, but with extra power. At the start of each round, each boxer is capable of throwing one super-punch at any time, although it becomes possible to throw one more with each knockdown they score against their opponent. Defensive techniques consist of blocking, dodging, and clinching. Each boxer has three attributes: 'power', 'stamina', and 'chin'.

Exhibition, Career, and Battle of the Legends are the three game modes available, with Career Mode allowing you to create your own boxer and slug through six fights for the Middleweight Belt. Each boxer is rated in punch power, stamina, and chin, depending on his style of fighting (street, military, or Olympic).

After selecting a style, you'll receive ten strength points to divide among the three categories. For every fight you win, you'll earn two more strength points, while every loss will give you one point for experience. Career progress can be saved via passwords received after each fight.

The game features a perspective just over your boxer's shoulder as your opponent looks toward the screen. Moves such as jabs, uppercuts, hooks, blocks, and ducks are all part of the fighting, as are clinches, allowing boxers to hug their opponents to regain stamina.

Other notable features include: super punches earned after each round or knockdown (up to three); optional "blackouts" causing the screen to go black after repeated blows to the head; adjustable exhibition rounds from 2 to 12 per match; instant replay letting you review each knockdown; and different skill levels for either Exhibition or Battle of the Legends game modes (from one to five).