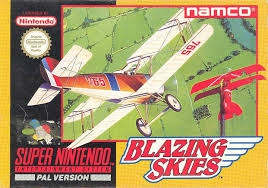 Wings 2: Aces High (ã‚¹ã‚«ã‚¤ãƒŸãƒƒã‚·ãƒ§ãƒ³?, lit. "Sky Mission") is the Super Nintendo Entertainment System sequel to the Amiga game Wings that takes place during World War I (though the developer is Malibu, rather than Cinemaware). The game was sold in Europe as Blazing Skies. A realistic aerodynamics system is used in the game that replicates the physics of a World War I biplane. Many of the loop-de-loops that are possible in modern aircraft were not possible given the limited speed and velocity of the early 20th century flying machines. As the leader of a squadron of British warplanes, the player must bomb German buildings viable to Kaiser Wilhelm II's war effort while over the fields of France. Five different pilots are given this difficult task; obtaining status points to improve their performance in combat.[6] If any of these pilots fails to complete their appointed mission but survives the actual combat, the end result with be a dishonorable discharge from the military. If he dies in the line of duty, then the player gets a cemetery scene with the game taking place in the year 1917. Between bombings, the player must also use guns to blast down German biplanes. Eventually, the player will get to face off with the Red Baron (famed WWI fighter ace Manfred von Richthofen). There is also a cheat code for radar which, unusually, was included in a small section of the manual. In real life, radar was not operationally employed as a means to seek out enemy aircraft until World War II. The game is controlled using controls that are friendly to most arcade players and a password system can be used for advanced players to gain the ability to join the conflict during any stage.