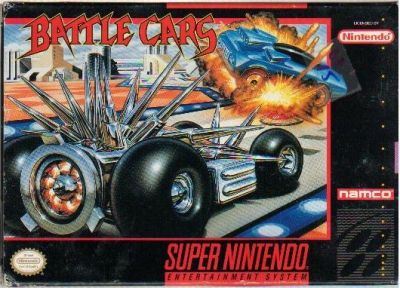 The start of the 22nd century saw a true new world order. Survivors of the devastation lived in city states. Technology sophisticated and jaded by years of war the people demanded a new sport for their new age....Battle Cars...technology...aggression...Battle Cars. Afforded the same popularity earlier cultures had given artists or pop musicians, Battle Car drivers are heroes. Their only rule is to win.

Take the futuristic speed and atmosphere found in F-Zero and mix in a little battle mode from Super Mario Kart, and you've got Battle Cars, a game with three types of cars and 14 different tracks. Players can shoot missiles and bombs at other cars in order to upgrade their vehicles to compete against bosses and race on tougher courses. One particularly effective weapon can even stall enemy cars in their tracks. The audio/visuals in this game are merely competent, and the racing action is hampered by uneven (and somewhat frustrating) controls, depending on how the car has been upgraded. Still, it's a fairly enjoyable game that is a challenge to complete.