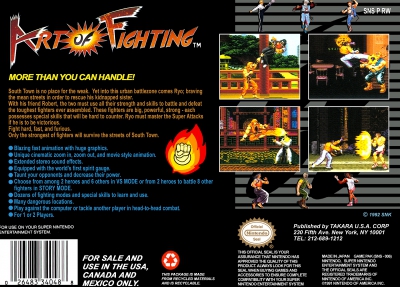 The gameplay differs from most fighting games. In this game, you have a Spirit meter. A Spirit meter is in the game and will decrease as you perform special moves. It can be recharged, but doing so leaves you open to attack. When your health is almost gone, you can perform a secret combination that will unleash a deadly attack on your opponent - provided you have a full Spirit meter.

A port of the Neo Geo game of the same name, Art of Fighting for the Super NES is a Street Fighter II-style fighting contest for one or two players. With 10 different characters to choose from and fight against, you can challenge the computer or a friend.

A one-player story mode, which lets you play as Ryo or Robert, will eventually pit you against all of the fighters in a series of one-on-one bouts. Your mission is to save Ryo's sister, Yuri Sakazaki, who was recently kidnapped.

Equipped with an assortment of two to three special moves, along with basic punching, kicking, and crouching maneuvers, each character in Art of Fighting uses a special form of karate known as Kyokugenryu. Special moves include Burning Upper, Cross Dive, Super Blaster, Overdrive Kick, Burning Knuckles and more.

Other features include a "Raz" button to deflate your opponent's spirit and special bonus rounds to perform solo feats of strength and skill such as breaking ice and performing a number of special moves within a given time.

'iVSNS PRWâ€”
0 1992 SNK
Published by TAKARA U.S.A. CORP
230 Fifth Ave. New York, NY 10001
TEL: 212-689-1212
MORE THAN YOU CAN HANDLE!
South Town is no place for the weak. Yet into this urban battlezone comes Ryo; braving
the mean streets in order to rescue his kidnapped sister.
With his friend Robert, the two must use all their strength and skills to battle and defeat
the toughest fighters ever assembled. These fighters are big, powerful, strong - each
possesses special skills that will be hard to counter. Ryo must master the Super Attacks
if he is to be victorious.
Fight hard, fast, and furious.
Only the strongest of fighters will survive the streets of South Town.
Blazing fast animation with huge graphics.
Unique cinematic zoom in, zoom out, and movie style animation.
Extended stereo sound effects.
Equipped with the world's first spirit gauge.
Taunt your opponents and decrease their power.
Choose from among 2 heroes and 6 others in VS MODE or from 2 heroes to battle 8 other
fighters in STORY MODE.
Dozens of fighting modes and special skills to learn and use.
Many dangerous locations.
Play against the computer or tackle another player in head-to-head combat.
For 1 or 2 Players.
USE ON YOUR SUPER NINTENDO
2NTERTAlNMENT SYSTEM.
Official
Ninrendo
Seal
8
FOR SALE AND
USE IN THE USA,
CANADA AND
MEXICO ONLY
THIS PACKAGE IS MADE
FROM RECYCLED MATERIALS
AND IS RECYCLABLE.
26483 34048
MADE IN JAPAN GAME PAK(SNS-006)
NINTENDO, SUPER NINTENDO
ENTERTAINMENT SYSTEM AND
THE OFFICIAL SEALS ARE
REGISTERED TRADEMARKS OF
NINTENDO OF AMERICA INC.
01991 NINTENDO OF AMERICA INC.
THIS OFFICIAL SEAL IS YOUR
ASSUuNCE THAT NINTENDO HAS
APPROVED THE QUALITY OF THIS
PRODUCT. ALWAYS LOOK FOR THIS
SEAL WHEN BUYING GAMES AND
ACCESSORIES TO ENSURE COMPLETE
COMPATIBILITY WITH YOUR SUPER
NINTENDO ENTERTAINMENT SYSTEM