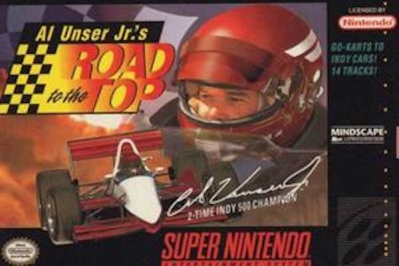 Al Unser Jr.'s Road to the Top is a Super NES racing video game where the player has to progress from go-karts to snowmobiles, IROC racing cars, and eventually to Indy racing cars. If the player does well, then his/her final challenge is to take on Al Unser, Jr. in the final event at Vancouver, British Columbia, Canada. This race uses the Molson Indy Vancouver as a final test of the player's hard-earned skills. Of course, the player can also practice every stage of the game except the final stage. Go-kart racing involves regional action in the United States of America while snowmobiles provide challenge for the game's simulated winter months. Competing in the stock cars of the IROC is considered to be gaining experience for the faster and lighter open wheel vehicles of the Indy league.