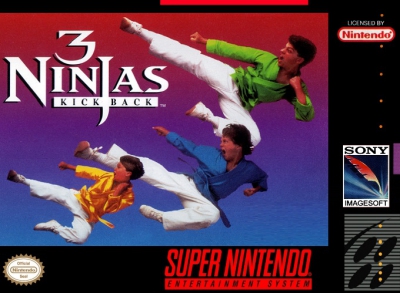 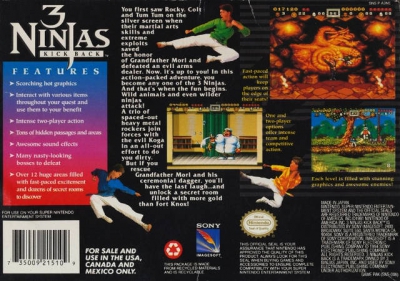 You first saw Rocky, Colt and Tum Tum on the silver screen when their martial arts skills and extreme exploits saved the honor of Grandfather Mori and defeated an evil arms dealer. Now, itâ€™s up to you! In this action-packed adventure, you become any one of the 3 Ninjas. And thatâ€™s when the fun begins. Wild animals and even wilder ninjas attack! A trio of spaced-out heavy metal rockers join forces with the evil Koga in an all-out effort to do you dirty. But if you rescue Grandfather Mori and his ceremonial dagger, youâ€™ll have the last laughâ€¦ and unlock a secret room filled with more gold than Fort Knox!

If you liked the feature film, then you'll love the Super Nintendo adaptation of 3 Ninjas. Play as one of the three teenage martial arts experts Rocky, Colt, or Tum Tum as you take on an army of ninjas, wild animals, and the evil Koga in an effort to rescue your sensei (Grandfather Mori) and his magical dagger. Go at it with or against a friend in the Two-Player mode working your way through beautifully rendered environments in your search to find your mentor. And be sure to keep your eyes peeled for secret areas and rooms that may offer great rewards. In 3 Ninjas Kick Back you won't have any time for kicking back Grandfather Mori is counting on you!

You Rock Col
and Tum rum on
silver screen when
their martial arts
and
exploits
the
of and
defeated a
Now. t â€¢s up to you' In this
Fin
adventure.
become any one of the 3
And that â€¢s when the f be
a n Ima I s a nd eve n W
Wild
attack'
s paced-out
heavy metal
loin
the evil Koga
In an all-out
effort to do
you dirty.
But if you
G"Mffather Morl and his
Ida
have the lastyaugrand
unlock a Secret r
filled w lth more gold
than fort Knox!
FOR SALE AND
USE IN THE USA,
CANADA AND
MEXICO ONLY.
graphis
Many
to
Z huge filled
with
5009 21510