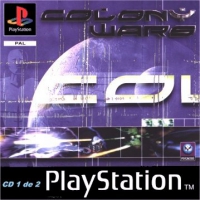 Since 3095, the Earth Empire has spread throughout the universe, taking what it wants and destroying the rest - all in the name of sustaining life on Earth. To the Empire, expansion is of the utmost importance, even above famine, drought and death. The League of Free Worlds exists to offer resistance and hope to the plundered outlying colonies. After a key victory, it is shown that the Empire's Navy can be harmed and the ranks of the League begin to swell. Colony Wars is a combat fighter game set in space. You, as the player, join as a recruit in the League's fleet. Missions take place in various fighters, from a 1st person view inside the cockpit, or a 3rd person view from behind your ship. Ships have separate meters for shields and armor, and the player must cycle between weapons designed specifically to damage each. At the most basic, purple lasers must drain a target's shields, followed by switching to red lasers to destroy them. The game features advanced lighting and particle effects for the Playstation, as well as a basic simulation of Newtonian physics. Thrusters are only active for as long as the accelerate button is held down. The player can burst fire their thrusters and drift, allowing for some advanced maneuvers. The campaign also features multiple endings and branching missions/storylines, based on your performance in the previous operations.

As tends to be the case when humanity's future is extrapolated, two sides are embroiled in an inter-galactic conflict and the outcome will decide the fate of mankind. In this case, it's a civil war between The Earth Empire and the League of Free Worlds. Humanity, having long since drained the planet Earth of its resources, has ventured out into the far reaches of space, colonizing planets and destroying those who would stand in its way. Sick of the cruel treatment at the hands of the despotic Tzar, the colonies revolt. Taking place a few months after the battle of Beney, players assume the role of a generic, faceless, rookie pilot determined to aid the fight for freedom in any way possible.

An action-oriented space-simulation, Colony Wars charges players with completing 70 different missions that range in scope from patrol, scouting, and escort to all-out offensive campaigns against fleets of frigates and smaller fighters. Depending on your battle prowess (or lack thereof), you'll take on new and unique missions. Failure will see your mission tree branch off in a direction where your past failures come into play. Successfully completing a mission, however, will allow you to continue on the pre-ordained path.

Your ship is equipped with primary and secondary weapons; the former run the gamut from lasers to EMP and plasma weapons, while the latter consist of missile and torpedo types. The various weapon types differ in effect. For example, some will only destroy shields, while others will damage the enemy craft itself. The numerous ships in which players will find themselves all vary in ability and ratings. Conventional rules apply here, with faster ships that pack less firepower and slower, heavier ships that are armed to the teeth. The camera can be switched between three different views, from a cockpit view to an external and an internal view, providing players with their desired perspective on the action. FMV sequences are interspersed throughout the title and, along with narrated mission briefings, help reveal the title's story. Colony Wars is also one of the first titles to support Sony's Dual Analog controller.