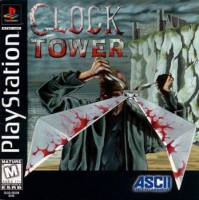 Clock Tower is a point and click survival horror game, with the player controlling a cursor to direct the character and give commands such as to investigate objects. The interface is akin to 1990-era computer adventure games, but simplified to work better with a gamepad. The game is separated into three scenarios, including a prologue during which the main character for the rest of the game is decided. In the prologue, the player controls Samuel Barton. In the first scenario, the player either plays as Jennifer Simpson or Helen Maxwell. The playable character for the second scenario can either be Nolan, Stan, or Helen. Between each scenario, there is additionally an intermission, in which the player can explore the town and gather clues via a 'world map' before moving on to the next level.

A murderous lunatic known only as "Scissorman" is out on a killing rampage, with 10 victims currently under his belt. The Scissorman is a deformed man (or is it a woman?) whose face is completely wrapped up in gauze, has a nasty limp, and wields a pair of three foot long scissors. Needless to say, no one really wants a piece of the scissors action and are all rightfully scared out of their minds. On the other hand, these murders cannot continue forever and he must be brought to justice. Assuming the role of either a psychiatrist, or the only person to ever escape Scissorman's menacing wrath, you must set out and solve the evil mystery surrounding the Clock Tower murders. Unmasking Scissorman is also a top priority next to staying alive.