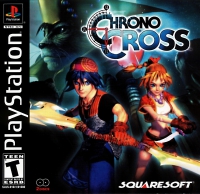 Chrono Cross features standard RPG gameplay with some differences. Players advance the game by controlling the protagonist Serge through the game's world, primarily by foot and boat. Navigation between areas is conducted via an overworld map, much like Chrono Trigger's, depicting the landscape from a scaled down overhead view. Around the island world are villages, outdoor areas, and dungeons, through which the player moves in three dimensions. Locations such as cities and forests are represented by more realistically scaled field maps, in which players can converse with locals to procure items and services, solve puzzles and challenges, or encounter enemies. Like Chrono Trigger, the game features no random encounters; enemies are openly visible on field maps or lie in wait to ambush the party

Take part in action-packed adventures with Chrono Cross, a role-playing game made for the PlayStation 1 platform. Play as Serge, a young boy who must go on quests through different parallel universes. As you travel through different worlds, you are aided by different characters to help uncover Serge's past. To beat the game, you must do battle with Serge's nemesis, Lynx. The worlds are majestic and add to the theatrical effect for this game. You have access to a single-player mode, and you can travel with Serge on foot or by boat. Additionally, you have the option of running away or fighting in different battle scenes, giving you a customized game-playing experience.

A Timeless Adventure...
Twenty years after the events in
Chrono Trigger; a new set of
adventurers are preparing for
a battle that will surpass even
space and time...
The long-awaited sequel to one of
history's favorite adventures
A multitude of playable characters
and intertwining game scenarios
Unique design eliminates random
battles and experience points
A new visual and audio experience
from the original creators
â€¢n.squâ€¢reson.com
by Square Electronic L.L.C.
i 41
6 62248 90008
TEEN
ANIMATED VIOLENCE
MILD LANGUAGE
Visit www.esrb.org or call 1-800-771-3772
for rating information.
7
Smâ€¢e Arts Utâ€žC - SO the Ccsta Wsa CA 92626
0 2000 Square co . ut A' reserved SOUARE soft SOUARES(YT
tromates of Sosate Co , Chtvo Chtrm C.rms CA.
dO&-O symW troma,rts
Sorj a inwx:toâ€¢
â€¢n u S A THIS S CCWAI&E WITH
crxsous uC US FOREIGN
SURROUND
2 DISCS