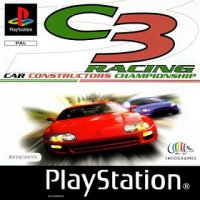 C3 Racing is a racing game released in 1998 by Infogrames for the PlayStation. The game allows you to race in 11 locations around the world in a variety of sports cars. In each country there are three tracks to race on. The term C3 Racing stands for three C's; Car Constructors Championship. The game was released in the UK as Max Power Racing as a tie-in to the Max Power magazine. In North America, the game was released as TNN Motorsports Hardcore TR, which featured different cars, but with the similar tracks (but relocated to locations within the United States) and menus.