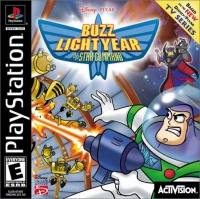 Buzz Lightyear is out to rid the universe of evil. With the aid of his friends at Star Command Mira, Booster, and X-R Buzz will battle Emperor Zurg, Gravatina, Torque, Skreel, and others in 14 levels that span seven different worlds. On each stage, chase the villain causing trouble and try to beat him to the getaway point. Along the way, pick up coins that can be used to purchase new weapons (arc laser, ice gun, proximity grenades, rocket launcher, gatling gun, and others), shields, jetpacks, hover boards, and other items. Cash can also be used to purchase the services of boost pads and teleports that will let Buzz bypass certain portions of the level. Will Buzz be able to put an end to Emperor Zurg's attempts to take over the universe? Only by playing BUZZ LIGHTYEAR OF STAR COMMAND will you be able to find the answers to that question.

Developed by Traveller's Tales, Disney/Pixar's Buzz Lightyear of Star Command is a third-person action/adventure game set in rendered real-time environments based on the animated television series. The evil emperor Zurg has initiated a heinous plan involving intergalactic terror; his vile cronies aren't far behind. Assuming the role of Buzz, you must thwart the emperor's evil doings and destroy his legions of minions.

Fortunately, you'll have a little help along the way -- not only will Mira, Booster and X-R accompany Buzz on his do-good crusades, you'll also recruit helpers including various critters known as Little Green Men and Zeb Nebula.

Along the way, Buzz will interact with and utilize a variety of pickup items and weapons. Weapons range from simplistic laser beams to destructive lightning guns and homing plasma bolts. Additionally, you'll have some vehicles at your disposal, including jetpacks, hoverboards and jetbikes. Pickup items consist of health packs and defensive shields; you'll need these if you wish to thwart emperor Zurg.

Will Buzz Lightyear save the world from danger or fall victim to the evil emperor's wrongdoings? The fate of mankind is in your hands!