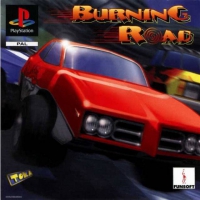 Burning Road is a 1996 arcade racing game for PlayStation in which you are timed in races and must race through checkpoints to gain more time. The game differs from other console arcade racing games in that you are timed to pick a track, a car and the transmission like in arcades. There are three difficulty levels: Easy, Medium and Hard.

In-game, there is a 'traffic' radar showing the player where opponents are (around the player's car only). The opponent in the lead has a silver cup icon above their vehicle, if the player gets in the lead, text saying 'RACE LEADER' displays at the top of the screen for a second informing them of being in the lead.

UK magazines at the time often referred to Burning Road as "Dayclona", due to its striking similarities to the Sega Arcade game, Daytona USA.

Burning Road is a sports car racing game which includes eight different cars and 6 different courses to race. Players can choose the color of their car and the point of view which is seen on the screen.

In practice mode, Players race seven computer drivers through one course of the Player's choosing.

In championship mode, Players race a decreasing number of racers, from seven down to 1, in races on each race course, placed in order from easiest difficulty to hardest.

Players can choose cars from manufacturers like Ford, McLaren, Lotus, and Ferrari. Each car has different abilities in areas like steering, handling, and top speed. Certain cars work better on certain tracks, but no one car has a definite advantage over the others.

Good sound effects and techno music punctuate the races. Players can enter their names with their best scores and save them on their PSX memory card. There is no violence. Burning Road is suitable for Players of all ages.