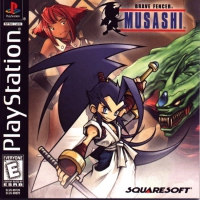 150 years ago, the legendary warrior known as the Brave Fencer Musashi saved the kingdom of Allucaneet from the evil Wizard of Darkness. Now, his spirit is reincarnated in a young, rather short-tempered boy. Fillet, the princess of Allucaneet, summons the reluctant hero to the palace and gives him the powerful sword Fusion, which he needs to defeat the evil Thirstquencher Empire. It soon turns out that the Empire is after another legendary sword, Lumina, so Musashi's first task is to get it before the bad guys do!.. Brave Fencer Musashi is an action game with strong RPG elements. Controlling Musashi, the player explores the pre-rendered backgrounds from third person view (similarly to Final Fantasy VII), visiting towns, talking to NPCs, etc. There is a day/night cycle in the game, which is manifested in the schedules of NPCs and/or monsters, as well as Musashi's fatigue level, which increases if he doesn't sleep enough. Musashi uses the two swords, Fusion and Lumina, to fight his enemies. The two swords have different properties: while Fusion behaves more or less like a traditional melee weapon, Lumina needs to be imbued with various elemental items in order to unleash powerful attacks.

After their breakaway from the Nintendo corporation, Squaresoft decided to expand their horizons. They were most known for their role-playing games, such as the highly successful Final Fantasy series. As evidence of their expansion, Brave Fencer Musashi is an action/RPG set in a 3D world.

You play a hero named Musashi, a spiky haired samurai. It seems the Kingdom of Allucaneet is in dire straits. The Wizard of Darkness, whom had once been banished, has returned from the Thirstquencher Empire to wreak havoc on the peaceful land. Princess Fillet summoned Musashi because he was the brave hero who fought the demon and put it in its place 150 years ago.

She told Musashi of the predicament they were all in which lead to his going on a quest to search for the Lumina sword. And that is where the adventure begins. As Musashi, you will have to save the inhabitants of Allucaneet Kingdom, the royal family, secure the sword and destroy the Wizard of Darkness forever.

Brave Fencer Musashi is played from a slanted, top-down 3D perspective. As you roam the world seeking out your next objectives, you will meet with all kinds of monsters and characters. Usually, characters will give you hints as to what you're supposed to be doing or offer you a quest.

Much like the Legend of Zelda series, the action unfolds in real-time. When you come across enemies, you have a few options to choose. You can either slash them to pieces with your trusty swords or you can assimilate their special abilities. For example, if you see a hopping flower and try and assimilate it, Musashi will be able to hop across objects he could normally not pass. You can assimilate one skill at a time, which adds a layer of puzzle solving and logic to the mix. Musashi can also increase hit and spell points the more his experience goes up.

The story unfolds over 6 chapters, each with a unique boss and set of linear objectives to conquer and complete. In one chapter, you'll have to save a certain number of townsfolk and in the next you may have to search out an item. No matter what you're doing, it ties into the storyline. While it is mostly text based, there is voice acting that comes on at specific times (mostly key story events).