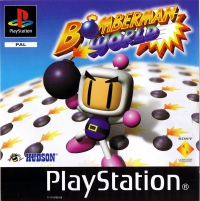 This is Bomberman's first appearance on the PlayStation in North America. This version maintains the style of play of the 2D Bomberman games, but has a pseudo-3D look to it. Bomberman World features the one player story mode as found in all Bomberman games, but it most importantly has a five player battle mode. The multiplayer game has twelve different maps, along with three different modes of play.