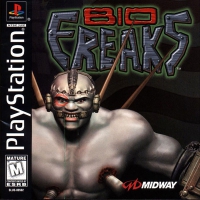 Bio F.R.E.A.K.S. is a 3D fighting game released by Midway in 1998. It was originally planned for arcades. However, this arcade prototype was scrapped and never officially released (although it exists on MAME), and the game was later released for the PlayStation, Nintendo 64 and PC.