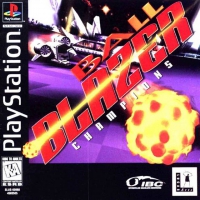 Ballblazer is a futuristic version of one-on-one indoor soccer, but with the use of a variety of weapons. Much like soccer, your goal is to put the ball in the net more times than your opponent does. Each player rides around in a rotofoil, used to speed around the arena field. However, in order to win the match, you must win three, four-minute rounds. Sounds easy enough, but you have to beat eight challengers in order to be the Ballblazer champion. Ballblazer offers eight characters to choose from and four modes of gameplay, including Practice, Tournament, Single-Player Free Play, and Two-Player Free Play. Each mode offers its own variety of fun

Four alien species -- the Zaltecs, Thilibies, Mandalars, and Kraytons -- had been at war for a long time. In order to end the bloodshed the aliens signed a treaty that created a new sport, BallBlazer. Once a year, from that day on, each species sends its best rotofoilers to a two-week competition to determine which species is the best. Also, other species have since joined the Interstellar BallBlazer Conference.

BallBlazer is similar to one-on-one indoor soccer with weapons. Your main objective is to put the ball into the goal more than your opponent can. Characters ride vehicles called rotofoils that they use to speed around the arenas. In order to win a match you must win two out of three of the 4-minute rounds. To become the champion eight opponents must be defeated.

Eight characters are available to choose from and game modes include: practice, tournament, 1-player free play, and 2-player free play. BallBlazer Champions requires one memory block for each saved game.