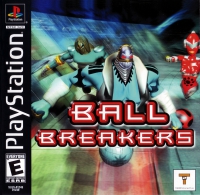 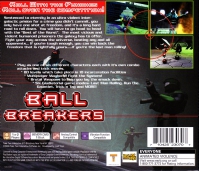 The universe is made up of human and synthetic lifeforms. Synthetic lifeforms are considered second class citizens by their human counterparts. The story takes place on the prison planet Alpha Prime, a world completely designed for the holding of criminals. You are a synthetic lifeform sentenced for an eternity for a crime you didn't commit and in order to earn your freedom, you must compete against other prisoners in competitions in 10 different incarceration facilities. To compete in these competitions however, you must undergo a procedure that removes your legs and replaces it with a rolling sphere. There are seven different events to compete in which are Pursuit, Last Man Rolling, Race, King of the Hill, Run the Gauntlet, Tag, and Powerball that pit you not only against your fellow inmates and guards, but against the levels themselves. Run the gauntlet charges you with making it to a goal point within a time limit, all the while avoiding other warriors and obstacles such as flame throwers, spikes, and gun turrets. Pursuit is identical, but it adds the challenge of the arena crumbling away. Powerball has you collecting balls throughout the arena and throwing them at a goalpost before time runs out. Tag has you collecting a set number of tokens that have been scattered throughout the arena within a set time limit.

teoe Pucceoes
Sentenced to eternity in an ultra violent inter-
galactic prision for a crime gou didn't commit.
only have one shot at freedorn, and it's a long
road to roll down. You will have to go head to head
with the "Best of the Worst". The most vicious and
violent humanoid prisoners the galaxy has to offer.
Fight your wag across the universe. beating arw and an
opponents... If you're tough enough. you can win back the
freedom that is rightfully ynrs.....if you're the last man rollÃ¤lg!
oz diff'rent
Plau as one
each with it's own ctrnbo
attacksamd trick moves.
80 levels which take place 10 iru:arceration facilities
â€¢ Multiplayer Mayberi!! Fight the System!
â€¢ Brutal Weapons to you lag the srnack doWn:
Six Gladiatorial game nodes: Last Rolling. RLKI ttÃ¦..
Gauntlet. Trifk Tag MORE!
Players
MEMORY CARD
1 Block
Analog Control
Compatible
Vibration Function
Compatible
Take TN Interactive 575 Broadwa; New York NY Im12
Take TWO Interactrâ€¢e Software Inc. by ost Toys.
tensed by CanÃ¸utet Eatertanm,ent America use conscie PlayStation ty
PiaÃŸtat.on loqos are registered tr.demarks c! Suri Complet Enteâ€¢tainment inc. TMrans Zon rs a trademark Dt
the and the uS SOFTWARE
WITH GAME CONSOLES WITH IHE NTSC OESIGNATION US AND FOREIGN PATENTS
10425 23070
EVERYONE
lost,"
ANIMATED VIOLENCE
Visit mvw.esrb.org or call
1-800-771-3772 for Rating information.