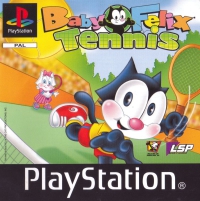 Felix The Cat is one of the oldest popular cartoon characters since 1919. Baby Felix was a kids animated television cartoon that ran in 2000 and featured infant character versions of Joe Oriolo's Felix television cartoon from the fifties. School has ended and summer vacation for Felix and his friends is going to be fun as they will be playing tennis. Players can choose to play as either Baby Felix, Kitty, or Tattoo, plus four others can be unlocked by achieving set challenges in-game. It is a standard tennis game with an angled view so that the opponent's court is smaller than the opposing player's and as the character approaches the net, the camera view slightly follows it. There is a training mode and a progressive Championship mode. On different court surfaces, the ball moves differently. There is a meter for the serve where hitting it at a different point will give it a spin. Two players can also go multiplayer head-to-head against each other.