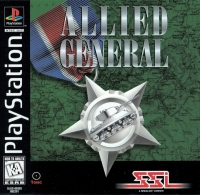 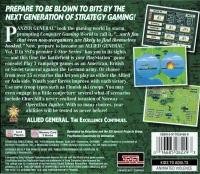 Allied General is the sequel to Panzer General and uses the same turn-based gameplay mechanics. This time the player experiences World War II from the Allied point of view during two British, one U.S. and one Russian campaign. The settings are Europe, Russia and Northern Africa. The most important thing to have are prestige points. These are earned by solving scenarios (more for a little amount of turns) and used to buy replacement units. But this is not the only reason to be concerned about the detailed mission results: surviving units are transferred to the next mission and receive experience points. The campaign is also not completely linear, and the next mission depends on the result of the last - this means a lost scenario does not necessarily result in a game over, and a scarce victory can have devastating results. Of course a great victory has positive effects on the next missions.

Developed by SSI, Allied General is a turn-based strategy game originally released for the PC. Your objective is to take control of either the Allied or Axis powers and engage in strategic warfare across the varying terrain of the European countryside.

There are over 35 different scenarios based on actual events that took place during World War II, each an attempt to stop Germany from world domination. You play as an American, British or Soviet general who must lead your troops to victory. As you progress through the campaigns, your individual units become more powerful and experienced.

It is up to you to carry out the battles, but be warned, success only comes to those who carefully plan ahead. Players interested in history may use actual strategies documented for the war, while others may want to experiment with their methods to victory. The choice is entirely up to you -- but succeed by any means necessary. For variety, a few alternate history campaigns have also been included; simply missions that attempt to document what would have happened if so-and-so had done this, or if a certain campaign had never taken place.

PREPARE TO BE BLOWN TOBITSBYTHE
NEXT GENERATION OF STRATEGYGAMING!
US in/ 41
sort C
Ã…wC
Close O
soft
Soot'
96
OS Hu oa
US Panqorn 43
ANZEI/OJENERAV took the gaming world by storm,s
TRANSPORr'
prompting Computer Gaming World to call it, "...such fun
that even non-wargamers are likely to Jind themselves
hooked, " Now, prepare to become an ALLIED GENERAL?
Vol. 11 in SSI's premier 5-Slar SeriesTM has you in its sights
and this time the battlefield is your PlayStation'M game
console! Play 3 campaign games as an American, British
or Soviet General against the German army. Or choose.
from over 35 scenarios that let you play as either the Allied
or Axis side. Watch your forces improve with each victory.
Use new troop types such as Finnish ski troops. You may
even engage in a little conjecture: several what-if scenarios
include Churchill's never-realized invasion of Norway â€”
Butte
s-srAR
ERIES
Operation Jupiter: With so many choices, your
abilities will be tested as never before!
ALLIED GENERAL. THE EXCELLENCE CONTINUES.
Developed by Halestorm and the SSI Special Projects Group.
PlayStation Conversion by Ultimation.
Memory Card
lor2
Players
3 blocks
ISBN 0-917059-68-9
0 16685 08229 3
KIDS TO ADULTS
ANIMATED VIOLENCE
STRATEGIC SIMULATIONS, INC. '675Almanor Avenue, suite 201 â€¢Sunnyvale, CA 94086 Allied General isa trademark of
Strategic Simulations, Inc., a Mindscape Company.@1996 Strategic Simulations, Inc. All rights reserved.
INTENDED SOLELY FOR PRIVATE HOME USE. PUBLIC PERFORMANCE OR OTHER USE IS
EXPRESSLY PROHIBITED.
Licensed by Sony Computer Entertainment America for use with the PlayStation game console.
PlayStation and the PlayStation logos are trademarks of Sony Computer Entertainment Inc.
The ratings icon is a trademark of the Interactive Digital Software Association. Manufactured and
printed in U.S.A. THIS SOFTWARE IS COMPATIBLE WITH PLAYSTATION GAME CONSOLES WITH
THE NTSC U/C DESIGNATION. U.S. AND FOREIGN PATENTS PENDING.
A MINDSCAPE' COMPANY