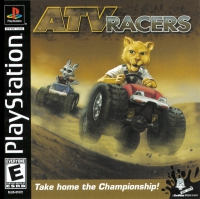 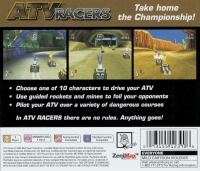 ATV Racers features a variety of animals who are out to win an ATV racing championship through means of vehicular combat racing. The game features a Tournament, Arcade, and Time Trial mode. In tournament mode, players get to choose one of the 10 (8 are selectable from the start and 2 are unlockable) animal racers to race with. The tournament offers three different sets of trophy races; the cross cup, dune cup, and the rock cup. Each cup consists of 3 different racetracks; underground, red rock, and atlantis. These 3 racetracks get altered depending on what cup the player is competing for. When racing, players attempt to beat the five opponents they are up against to the finish line. To help achieve this goal, players can shoot guided rockets, use speed boosts, and lay mines to hinder their opponents. The higher the position the player gets in a race, the more points they earn. The player with the most points after all the races are done wins the championship cup.

LAP
Take home
the Championship!
Choose one of 10 characters to drive your ATV
Use guided rockets and mines to foil your opponents
Pilot your ATV over a variety of dangerous courses
In ATV RACERS there are no rules. Anything goes!
ATV Racers 0 2003 Mud Duck Productions, a ZeniMax Media brand. Distributed in North America under license
from Midas interactive Entertainment Ltd. Mud Duck, ZeniMax and their respective logos are registered trademarks
or trademarks of ZeniMax Media Inc., 1370 Piccard Drive, Suite 120, Rockville, MD 20850. All Rights Reserved.
ZeniMa\'
Licensed by Sony Computer Entertainment America for use with the PlayStation game console. PlayStation and the
PlayStation logos are registered trademarks of Sony Computer Entertainment Inc. The ratings icon is a trademark of
the Interactive Digital Software Association. Manufactured and printed in the U.S.A. THIS SOFTWARE IS COMPATIBLE
WITH PLAYSTATION GAME CONSOLES WITH THE NTSC U/C DESIGNATION U.S. AND FOREIGN PATENTS PENDING
0 93155
MILD CARTOON VIOLENCE
Visit www.esrb.org or call
1-800-771-3772 for Rating information.