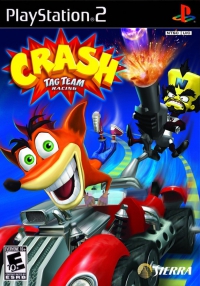 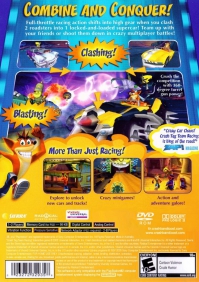 When Ebeneezer von Clutch, the owner of the famed racetrack amusement park MotorWorld, has the Black Power Gem that maintains his life force stolen, he charges Crash and friends (and foes) to recover the gem and catch the culprit. Similar to previous racing games in the Crash Bandicoot series, players are able to choose from a variety of characters from the series, including both notable allies and enemies, along with several notable new characters. In addition, Crash Tag Team Racing introduces the ability to 'clash' with another racer, allowing the two to create a hybrid vehicle to cooperatively destroy their opponents.

Crash Bandicoot returns with a bang in this 2005 Vivendi Universal release for the PlayStation 2. Crash: Tag Team Racing adds a twist to previous Bandicoot racing games with the brand new ability to merge two vehicles into a weapon wielding super car bursting with technology. MotorWorld, created by the German cyborg Ebenezer Von Clutch, is an incredibly dangerous racing theme park that Crash is lured into visiting. Tasked with finding the Power Gems of MotorWorld, along with Ebenezer Von Clutch's Black Heart, Crash must race against time with the help of pals Crunch and Coco. Crash: Tag Team Racing features a diverse mix of eight playable characters and five main areas of MotorWorld to explore and race through.