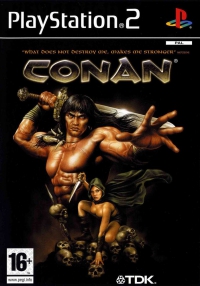 Black-haired and sullen-eyed, a thief, a reaver, a slayer. The legends that surround his name, speak of the world before history, where shadows of magic and dark alien gods shrouded the known world and the fate of whole empires were dependent on the strength and skills of a single sword. And this is one of those legends.... Conan combines several of the most popular genres such as action, adventure, and role-playing into a single package in an effort to capture the spirit of the world's most popular savage. Utilizing music from the 1982 film and heavily reliant on challenging the player with logical puzzles and traps, Conan follows its hero from frozen landscapes and burning deserts to the dangerous lava lakes inside burning volcanoes.

A 3D mystery adventure game based on the long-running anime series, Detective Conan (also known as Case Closed in America.) Kudo Shinichi was once a teenaged detective, but when the culprit of a major case used a magic drug on the sleuth, Kudo becomes trapped in the body of a seven-year-old boy. He takes on cases in his more awkward form, while searching for the villain who did this to him. You can move around freely through a 3D mansion, speaking with other characters in full voice. To solve the mystery, you'll have to make use of the game's "Visual File and Scratch System." As part of this system, hints and clues that you've collected while on your investigation will have to be assembled in the correct order. If all the pieces are assembled in the right order, the game will show you a movie depicting the end sequence for the mystery. Make a mistake, and your errors are marked with a big X, suggesting that you should do some rethinking.