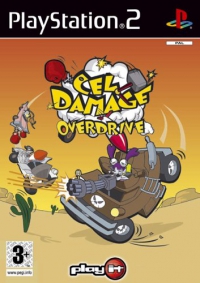 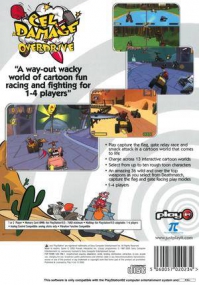 Cel Damage is a 2001 video game for the Xbox, PlayStation 2 and Nintendo GameCube. It was developed by Pseudo Interactive and published by Electronic Arts. It was released as Cel Damage Overdrive for the Sony PlayStation 2, and as of 2010 on the PlayStation Store. An HD re-release of the game, titled Cel Damage HD was released in April 2014 for PlayStation 3, PlayStation 4 and PlayStation Vita.[1] Cel Damage is a cartoony take on vehicular combat games like Twisted Metal. The story focuses on six cartoon characters from a fictional cartoon show called "Cel Damage". The characters annihilate each other to the delight of TV audiences and, since they are cartoons, instantly regenerate. The player battles through thirteen different levels and three game modes. Weaponry for Cel Damage includes cartoon staples like vacuum nozzles and portable holes, mundane weaponry like chainsaws and baseball bats, and items like freeze rays, giant springs, and portable nuclear devices.