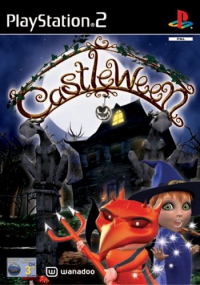 Castleween's magic formula: a pinch of horror, a dash of surprise and a whiff of fantasy. It's Halloween night and Alicia's and Greg's friends have all had a terrible curse put on them: their souls have been stolen! Alicia and Greg will have to cross over into the kingdom of the dead if they want to find their friends and free them from this dreadful spell. Help them complete 12 levels full of skeletons, vampires, witches, devils and other monsters which you will have to avoid and/or fight. If you're good enough, you will collect life and invincibility bonuses as well as precious sparks. You can play as either Alicia or Greg and, provided you have collected enough sparks, can change character whenever you want. But be careful, making a wrong selection can literally cost you your life! Alicia can freeze water, lava and her enemies in their tracks. She can use her witch hat as a boomerang to attack her enemies and can also shrink herself so that she is completely covered by it. However, she is weak against heat. Greg can use his devil's fork to fight in kung-fu style hand-to-hand combat. He is also capable of executing dangerous triple jumps and he can walk through fire but is afraid of the cold.