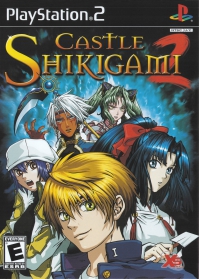 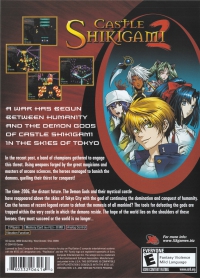 Sequel to Shikigami no Shiro, SS2 is a vertical-scrolling shooter with sci-fi elements. As in most games in the genre, the game puts you in control of a small fighter as you attempt to make your way past several stages filled with enemy ships charging and attacking you in different patterns. The game features 7 distinct characters with psychic powers (which manifest in-game as bomb-type attacks and other special moves) and unique fighters, and the game features a story mode for each character, in which they have different dialogue and plot-sequences for each boss fight. Also included is a weapon system similar to Psyvariar's in which you can enhance your power and rate of fire by scraping incoming bullets.

This vertically scrolling shooter is made for fast, arcade-style play. With a premise that sounds like some unusual cross between Space Harrier and Silpheed, the game puts players in control of flying, shooting, super-powered people, instead of futuristic jet fighters or space ships. Characters float forward blasting the countless enemies that seem to attack in spurts and waves, using a combination of standard shots, rapid-fire attacks, and screen-clearing bombs. The PS2 version of Castle Shikigami 2 comes to the U.S. thanks to XS Games, the same publisher who shipped Alfa's Mobile Light Force 2 to North American retailers a few months earlier.

CASTLE S)
HIKJGADTI
HES BEGUN
BETWEEN HUMRNITY
THE DEMON GODS
OF C-RSTLE sH1+<1GRM1
IN THE SKIES OF TOKYO
In the recent past, a band of champions gathered to engage
this threat. Using weapons forged by the great magicians and
masters of arcane sciences, the heroes managed to banish the
demons, quelling their thirst for conquest!
The time: 2006, the distant future. The Demon Gods and their mystical castle
have reappeared above the skies of Tokyo City with the goal of continuing the domination and conquest of humanity.
Can the heroes of recent legend return to defeat the nemesis of all mankind? The tools for defeating the gods are
trapped within the very castle in which the demons reside. The hope of the world lies on the shoulders of these
heroes; they must succeed or the world is no longer...
Vibration Function
XS Games, 8800 Global Way, West Chester, Ohio 45069
0 2004 XS Games
Computer Entertainment Inc. The ratings icon is a trademark
of the Entertainment Software Association. Manufactured
and printed in the U.S.A. THIS SOFTWARE IS COMPATIBLE
WITH PLAYSTATION 2 CONSOLES WITH THE NTSC U/C
DESIGNATION. U.S. AND FOREIGN PATENTS PENDING.
For more info:
www.XSgames.biz
EVERYONE
Fantasy Violence
Mild Language
ESRBCONTENT RATING www.esrb.org