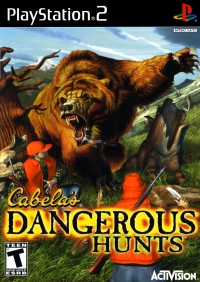 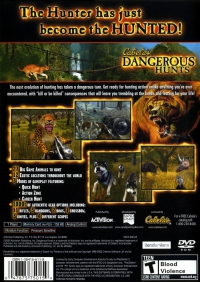 Cabela's Dangerous Hunts is a hunting game with adrenaline - hunt or be hunted! Many of the animals you'll be after are dangerous and aggressive and will take you one-on-one - and you'll be armed with a primary weapon as well as a knife or pistol for close combat defense. You'll hunt for 27 animals in 12 regions. Animals include dangerous species such as bears, wolves, leopards, rhinos and cape buffalo; big game species such as moose, bighorn, mountain goat, elk and caribou; and exotic species such as impala, duiker and kudu. The regions include British Columbia, Colorado, New Mexico, Tanzania and Zimbabwe. Game modes include Quick Hunt (one tag, one animal, one region), Action Zone (warp from location to location, where dangerous animals are waiting to attack you), and Career Hunt (a series of missions where you have some choice as to which task you'll take on next, and unlock chartered hunts).

EThe- Hunter has jusi
become the HUNTED!
15Ã… GEROÃœSÃ…
HUNTS+\
The next evolution of hunting has taken a dangerous turn. Get ready for hunting actio unliki anything you've everâ€”
encountered, with "kill or be killed" consequences that will leave you trembling at theine%s jiÃ¶dfing fogour life!
BIG GAME ANIMALS TO HUNT
EXOTIC LOCATIONS THROUGHOUT THE WORLD
MODES OF GAMEPLAY FEATURING:
QUICK HUNT
â€¢ ACTION ZONE
â€¢ CAREER HUNT
1000s
OF AUTHENTIC GEAR OPTIONS INCLUDING:
RIFLES,
HANDGUNS, Bows, CROSSBOW,
KNIVES, PLUS ' DIFFERENT SCOPES
Published By
Licensed By
Fora Cabela's
catalog call:
â€¢ 1-800-230-8400
Developed By
SAND
www.activision.com www.sandgrainstudios.com www.cabelas.com
75015.206.US
Activision Publishing, Inc. P.O. Box 67713. Los Angeles. CA 90067
02003 Activision Publishing. Inc. Dangerous Hunts is a trademark of Activision, Inc. and its affiliates. Activision is a registered trademark of
Activision. Inc. and its affiliates. All rights reserved. Cabela S and the Cabelaâ€¢s logo are registered trademarks of Cabelaâ€¢s Incorporated.
Published and distributed by Activision Publishing, Inc. and its affiliates.
RenderWare is a registered trademark ot Canon Inc. Portions of this software are Copyright 1998-2003 Criterion Software Ltd. and its
Licensors.
Renderware
R 0M
TEEN
Blood
Violence
www.esrb.org
9
Licensed by Sony Computer Entertainment America for play on PlayStation 2
computer entertainment systems with the NTSC WC designation only. "PlayStation"
and the "PS" Family logo are registered trademarks of Sony Computer Entertainment
Inc. The ratings icon is a trademark of the Entertainmet Software Association.
Manufactured and printed in the U.S.A THIS SOFTWARE IS COMPATIBLE WITH
PLAYSTATION 2 CONSOLES WITH THE NTSC IJ/C DESIGNATION. U.S. AND
FOREIGN PATENTS PENDING.
ISBN 1-58416-611-8
47875 75015