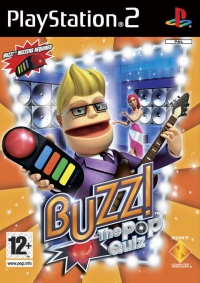 Buzz!: The Pop Quiz will test your knowledge of music from the 1990's to the present day. It is a general knowledge quiz game that uses four bespoke USB buzzers, introduced in Buzz!: The Music Quiz, instead of the usual PlayStation 2 dual shock controllers. This means that four players can play right away. The game itself is set in the format of a TV gameshow with the contestants behind podiums. The questions appear on a jumbotron, introduced by the show's host: Buzz. The main game is split over eight rounds starting with simple game mechanics but getting gradually more complex and causing more competitiveness. The question types are general knowledge and cover a large amount of subjects using pictures, videos, music clips etc. As well as the regular game, you can play an eight player game if you have a second set of buzzers. There's also team play and a quizmaster mode. There are two versions of the game; with or without a set of buzzers included.