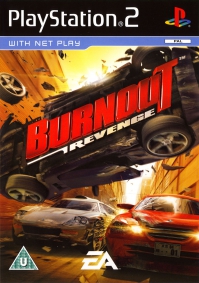 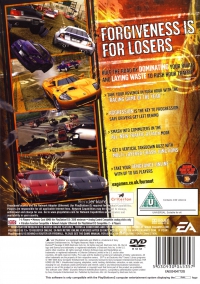 In Burnout Revenge, players compete in a range of racing game types with different aims. These take place within rush-hour traffic, and include circuit racing, Road Rage (where players cause as many rivals to crash as possible within a time limit, or until the player's car is wrecked), Burning Lap (a single-lap, single-racer time attack mode), Eliminator (a circuit race where every thirty seconds, the last-placed racer's car is detonated; the race continues until only one racer is left), and Crash (where the player is placed at a junction with the aim of accumulating as many "Crash Dollars" as possible). A new gameplay feature in Burnout Revenge is the ability to ram same-way small to medium traffic, known as "traffic checking", propelling the rammed car forward; the event in which a "checked" car hits a rival is considered as a Traffic Takedown. Traffic checking is the focus of a new race type, Traffic Attack (whereby a player must earn a set amount of Crash Dollars through checking traffic), which can be used later on.

Revenge is the name of the game, both figuratively and literally, in this follow-up to Criterion's breakthrough sports car racer, Burnout 3: Takedown (truly a "smash hit"). As in its immediate predecessor, offensive driving and spectacular crashes are the focus of Burnout: Revenge, and this fourth game in the series is designed to offer more avenues to destruction than any of its predecessors, by featuring a greater capacity for real-time damage and car deformation, multilevel track layouts that allow players to ram their opponents from below or above, as well as from behind or in front, and a new "revenge meter" that encourages players to pay back -- with interest -- those who wrong them on the roads. Wreckage-prone racing occurs all around the world in this edition of Burnout, in areas inspired by real-world cities, such as Detroit, Rome, and Tokyo. A number of online modes are included as well, for properly equipped gamers who are raring to test their destructive driving skills against other human opponents.

lil'
FOKGIVENESS
TO RUSH
TAKE YOUR REVENGE IN RUSH HOUR
IS THE KEY TO PROGRESSION -
SAFE DRIVERS GET LEFT BEHIND
' SMASH INTO COMMUTERS IN THE
MODE
GET A VERTICAL TAKEDOWN WITH
WITH UP PLAYERS
eagames.co.uklburnout
Criterion
e Network Adaptor (Ethernet) (for PlayStation@2) required for e
Players are responsible for all applicable Internet fees. Network Capabilities may be bi
withdrawal and charge for use. Go to www.playstation.com for Network Capabilities a e
availability in your country.
1-6 Players â€¢ Memory Card (8MB) (for PlayStation@2): 35KB minimum â€¢ Analog Control Compatible: analog sticks only
â€¢ Vibration Function Compatible â€¢ Network Adaptor (Ethernet) (for PlayStation@2) Compatible: 2 - 6 Players
ATION REQUIRED TO ACCESS ONLINE FEATURES. TERMS & CONDITIONS AND F
Contains mild violence
UNIVERSAL. Suitable for all.
DO DOL
PROLO 'c n
D AT WWW.EAGAMES.COM.
YOU MUS BE 13+ TO REGISTER ONLINE. EAMAY RETIRE ONLINE FEATURES AFTER 30DAY ICE POSTÃ‰D ON WWW.EAGAMES.COM. IF YOUR
IS BEHIND A ROUTER OR FIREWALL, PLEASE SEE THE GAME MANUAL FORA I ON YOUR CONNECTION.
PlayStatio
â€¢ and â€¢PlayStation* are registered trademarks and DNAS is a trademark of Sony
Computer Entertainment Inc. All Rights Reserved. Made in Austria.
Burnout'" Revenge 0 2005 Electronic Arts Inc. All rights reserved. Electronic Arts, EA. the EA
logo and Burnout are trademarks or registered trademarks of Electronic Arts Inc. in the US.
and/or other countries. All rights reserved. Criterion Software logo and RenderWare are
trademarks or registered trademarks of Criterion Software Limited in the U.S. and/or other
countries. All rights reserved. Dolby. Pro Logic and the double-D symb01 are trademarks Of Dolby Laboratories. All
other trademarks are the property of their respective owners. EATM is an Electronic Arts'" brand. Library programs
0 1997-2005 Sony Computer Entertainment Inc. exclusively licensed to Sony Computer Entertainment Europe. FOR
HOME USE ONLY. Unauthorised copying. adaptation, rental, lending, distribution. extraction. re-sale. arcade use.
charging for use, broadcast, public performance and internet, cable or any telecommunications transmission.
access or use of this product or any trademark or copyright work that forms part of this product are prohibited.
This software uses "DNAS" (Dynamic Network Authentication System), a proprietary authentication system created
by Sony Computer Entertainment Inc. Published by Electronic Arts Ltd. Developed by Electronic Arts Inc.
5 030930 045357
EAE034047721S
This software is only compatible with the PlayStationÃ¸2 computer entertainment system displaying the logo