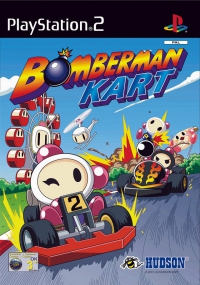 Hudson brings a sequel to 2001's Bomberman Kart to the PlayStation 2. Bomberman Kart DX is not as much a new game as an upgrade of the tried and true kart racing action found in the original. The numbers of courses and characters have increased, and the graphics have also been improved. Hudson also promises a mode of traditional Bomberman delights -- sure to be a reason many people pick up the game in the first place.