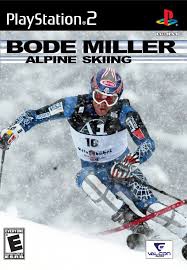 Bode Miller Alpine Skiing is a PlayStation 2 and Windows video game, named after the American alpine skier Bode Miller. It was developed by 49Games and published by Valcon Games. It was released on February 6, 2006. It is the first console sim game to concentrate solely on the sport of skiing (not including skiing and snowboarding hybrid games). The four disciplines of skiing included are Downhill, Slalom, Giant Slalom, and Super-G. The game also includes a multi-season career mode, allowing the player to compete in a yearlong World Cup starting out as a junior skier, and the chance to qualify for the amateur and professional circuits while training, competing, and gaining sponsors.

This PS2 game places players on perfectly powdered slopes, strapped into the hourglass-shaped skis of United States Olympic medalist, FIS (FÃ©dÃ©ration Internationale de Ski) champion, and purported "bad boy" of the sport Bode Miller. To make the most of their abilities, players can train with a coach, and use their earnings from competitions and sponsorship deals to buy new and better gear. Risk-takers can also earn money away from the mountain, by placing bets on their favorite skiers to win competitions. In all, the game features 32 slopes set in 18 internationally famous venues.