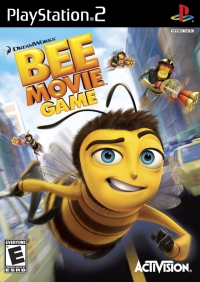 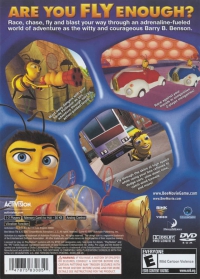 Bee Movie Game is a video game based on the film Bee Movie produced by DreamWorks Animation SKG. The game was released on October 30, 2007. Beenox developed the Xbox 360, PlayStation 2, and Windows versions of the game, Smart Bomb Interactive developed the Wii version, and Vicarious Visions developed the Nintendo DS version. As Barry B. Benson, players take on an adventure to save the bees' production of honey through New York City. Players get to experience Barry's life within the hive and navigate their way around the world from the feature film using many techniques. Players can drive through the city using racecars, scooters, taxicabs, and trucks. Players can "fly" Barry at high speed through the sky. Using the Pollinator, players can Blast through obstacles or they can Buzz to cause a chain reaction. Players get to Stop Time by using Barry's bee reflexes. The video game features 2-person multiplayer mini games.[1] The video game Shrek the Third includes a demo of the game which has Barry chase a truck but the word Honey Farms is omitted. Jerry Seinfeld, John Goodman, Patrick Warburton, and Tress MacNeille reprise their voices from the movie in this game.

Dreamworks' animated film about a restless bee swarms onto PlayStation 2 consoles in Bee Movie Game. The movie follows the story of Barry B. Benson, a recent college graduate who wants more out of life than just making honey for the only business in town, Honex. But when Barry ventures outside the hive and discovers that humans are taking all the honey, he decides to strike back, allowing gamers to guide Barry through more than 20 levels of flying, driving, chasing, buzzing, and blasting.

Players can drive through the bustling streets of New Hive City in racecars, taxicabs, scooters, and trucks or take to the air to fly, hover, or dive through the skies of the outside world. Some flying stages involve aerial dogfights in which Barry must blast insects with his trusty pollinator, while other levels involve completing a series of quick time events to chase after cars in New York City or cause comedic chain reactions. The fast-paced racing and flying can be eased with the help of Barry's superb bee reflexes that allow him to slow time to a crawl. Gamers can earn bonus points by playing arcade and puzzles games, and two players can earn their stripes by going head-to-head in mini-games.

ARE you FLY ENOUGH?
Race, chase, fly and blast your way through an adrenaline-fueled
world of adventure as the witty and courageous Barry B. Benson.
1-2 PIN ers Memo Card -50 KB Conâ€¢ral
Function
N ISC
U S iS CONSOtES
A DOCTOR BEFORE USE
SEi2UREs
PRIOR Hisrow usmc. AND FOR
47875 83085
www.BeeMovieGame.com
PR0 LOGIC
EVERYONE
Mild Cartoon Violence
ESR8tONTEN1