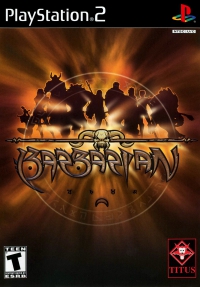 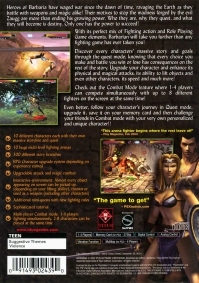 The once tranquil land of Barbaria has been cursed. Clouded under a dark shroud of death and disease, the world is slowly being eaten alive. The man responsible, a powerful wizard named Zaugg, has convinced the people throughout the land that there is no hope for their existence, and that his rule is the one and only. But there is a prophecy. The foretelling of a great Barbarian warrior who will rise up against the wizard Zaugg and bring balance to the land. Alas what identity will the legendary warrior take? Could it be the revenge-minded Dagan of Dolok? Or maybe Magnus, Lord of the Undead; perhaps even Zaugg's own apprentice Corath will be the end of the spiteful necromancer. The answer is not clear, but that is where you come in. Assuming the role of 10 unique combatants, it is your duty to defeat the monstrous soul and finally give a happy ending to this sad, twisted story.

Barbarian is a melee-oriented adventure game with large, interactive arenas and a player-directed non-linear storyline. A powerful and evil being known only as Zaugg has cursed the land of Barbaria with his merciless greed and vile magic. Despair blankets the countryside, but the ancient prophecies that warned of these dark days also spoke of a great hero who would eventually rise to strike down the villain and free the land from his dreadful curse. Brave and powerful warriors from all walks of life in Barbaria now come forward, each with his or her own personal motivation to seek the destruction of the evil Zaugg.

Barbarian features ten playable characters, each with a different style and blend of skills. The bold Dagan and the princess Keela seek vengeance for lost loved ones who fell at the hand of Zaugg. Others, such as the undead Oops and the cruel Malik, have suffered as minions of Zaugg and now seek to destroy their former master. Each of the characters faces a unique adventure featuring over 30 different quests to follow in the order of the player's choosing. Characters can also meet for one-time battles in the game's versus mode, which supports up to four players through the PS2's multitap.

Heroes of Barbaria have waged war since the dawn of time, ravaging the Earth as they
battle with weapons and magic alike! Their motives to stop the madness forged by the evil
Zaugg are more than ending his growing power. Who they are, why they quest, and what
they will become is destiny. Only one has the power to succeed!
With its perfect mix of Fighting action and Role Playing
Game elements, Barbarian will take you further than any
fighting game has ever taken you!
Discover every characters' massive story and goals
through the quest mode, knowing that every choice you
make and battle you win or lose has consequences on the
rest of the story. Upgrade your character and enhance its
physical and magical attacks, its ability to lift objects and
even other characters, its speed and much more!
Check out the Combat Mode feature where I -4 players
can compete simultaneously with up to S different
fighters on the screen at the same time!
Even better, follow your character's journey in Quest mode,
upgrade it, save it on your memory card and then challenge
your friends in Combat mode with your very own personalized
and unique character!!
"This arena fighter begins where the rest leave off'
"APE
O
o
- Play Magazine, Feb 2002
3
"The game to get"
â€” PSXnation.com
By
TITUS
SAFFRE
10 different characters each with their own
massive storyline and quest
10 huge multi-level fighting arenas
300 different story branches
RPG Character upgrade system depending on
experience earned
Upgradable attack and magic combos
Interactive environment: Almost every object
O appearing on screen can be picked up
(depending on your lifting ability), thrown or
used as a weapon (including other characters)
Additional miniâ€¢quests with new fighting rules
O Sophisticated tutorial
Multiâ€¢player Combat mode: 1-4 players
fighting simultaneously, 2-8 characters can be
played at the same time
www.titusgames.com
TEEN
Suggestive Themes
Violence
0 91493 02439
control
ers
-20432 Chatsmth, CA 90311
BARBARIAN: 0 2002 TITUS SOFTWARE CORPORATION. Developed by Saffiree. Butman, Titus aryl the Titus logo are
registered trademarks of Titus Software Corporatm. All rights reserved.
Licensed for play the PlayStation 2 computer entertainment systems With NTSC WC designation (Yily. "PlayStatitY1" and
the "PS" Family are registered trademarks of Sony Computer Entertainment Inc. The ratings icon is a trademark of the
Interactive Digital Software Associatm Manufactured and in the U.SA THS SOFTWARE IS COMPATIBLE MTH
PLAYSTATION 2 CONSOLES MTH THE NTSC tyc DESIGNATION. U.S. AND FOREIGN PATENTS PENDIN(i