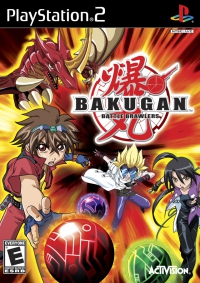 Bakugan Battle Brawlers (çˆ†ä¸¸ãƒãƒˆãƒ«ãƒ–ãƒ­ãƒ¼ãƒ©ãƒ¼ã‚º Bakugan Batoru BurÅrÄzu?) is a Japanese-Canadian action adventure[1] television series produced by TMS Entertainment and Japan Vistec under the direction of Mitsuo Hashimoto. The story centers on the lives of creatures called Bakugan and the battle brawlers who possess them. Though initially a failure in Japan, the series became popular in the United States and Canada, prompting the creation/order of several follow-up seasons, (New Vestroia, and Gundalian Invaders) which aired in other countries before Japan. The fourth and final season, Mechtanium Surge, was never broadcast in Japan and instead aired in Canadian and U.S. markets. The Bakugan franchise are co-productions from Nelvana Enterprises, Spin Master, Sega Toys and TMS Entertainment, with animation by TMS Entertainment in association with Sega Toys. A spin-off series called Baku Tech! Bakugan which featured the characters from the manga of the same name aired on TV Tokyo from April 7, 2012 to March 30, 2013. It was followed by a sequel series called Baku Tech! Bakugan Gachi which ran from April 6, 2013 to December 28, 2013.[2]

The first video game based on the Bakugan license combines the action of the collectible card game with a storyline penned by writers of the animated series. Players will engage rivals in a series of battles to develop their unseasoned Bakugan brawler into a fierce competitor. The action first involves throwing Bakugan cards onto the ground before tossing a Bakugan ball toward them. When two balls land on the same card, they will transform into powerful monsters that will fight over the card. Bakugan Battle Brawlers offers an assortment of distinctive battle arenas, featuring various shapes, sizes, traps, and other distinguishing elements. Forty Bakugan are available to collect and defeat, with hundreds of cards included to fine-tune strategies. Battle the computer or challenge friends to a multiplayer match with custom rules.