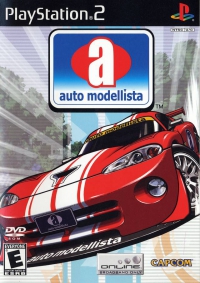 The North American version of Capcom's cel-shaded racer offers numerous changes and improvements over its Japanese cousin, including three new courses (nine in all, eight normal and one hidden), nine new American cars (for a grand total of 69 real-world, licensed vehicles), more kinds of races, a slick, all-new opening video, more replay options, "improved handling and physics," and additional musical selections. Online play supports up to eight racers on one track, while offline players can get to grips with the Arcade mode, a standard enter and race scenario, Garage Life, which is the Career mode of the game, and VJ and Theater, an arena enabling players to watch, edit and direct race replays of their choice.

Capcom combines classic street-racing gameplay with highly-stylized graphics in Auto Modellista. While cel-shading creates a distinctively cartoonish look, the believable physics and rich detail are designed to drive this game far beyond standard Saturday morning fare. Players can choose a car from a number of licensed Japanese manufacturers, including Honda, Mazda, Toyota, Nissan, Mitsubishi, and others. Once a favorite car is selected it's time to hit the streets, for organized competition or pick-up dragging.

Winning players earn the opportunity to upgrade their cars by adding new parts and kits. Like the cars themselves, the game's urban areas are all modeled after real-life locations in Japan. To offer more extensive enjoyment of Auto Modellista's distinct look, players can enter a special "VJ" mode to enhance their replays with camera angle cuts, special effects, and music.