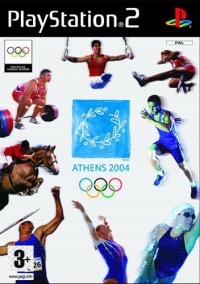 With Athens 2004, you can capture all the spirit and emotion of the Olympic Games. The game lets you compete in four arcade and eight competition game modes, ranging from Practice to the Official Decathlon and Heptathlon combined events, while choosing one of 64 countries and 800 different characters. See what it's like to compete in some of the Olympic Games' most challenging sports, including athletics (track & field), aquatics (swimming), gymnastics, shooting, archery, weightlifting, and equestrian. Participate in such events as hurdles, long jump, pole vault, shot put, and more.

The "Official Video Game of the (2004 Summer) Olympic Games" is designed to give players a taste of the preparation, perseverance, and power demanded of aspiring athletes who enter the world's preeminent athletic competition. PlayStation 2 players can compete in more than two dozen prominent events, as one of 800 characters virtually representing one of 64 countries. They'll hone their skills in Practice Mode, focus on a favorite competition in the Single Event Mode, and go for the gold in the game's Challenge Mode. Featured events are from the realms of archery, weightlifting, equestrian, gymnastics (4 events), aquatics (4 events), and track & field (13 events). Athens 2004 is compatible with a dance mat controller, offering gamers a more visceral means of participation.