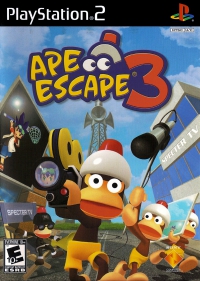 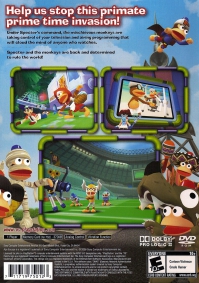 Kei and Yumi take the lead as the new heroes. Their quest is to capture all 400 monkeys. You control either Kei or Yumi. The gameplay involves using various methods and weapons to catch them all. The game has many levels with different themes, such as a Haunted Castle, a Racing level, Jungle settings, TV studios and other settings. You can slow the animals down with various objects such as a stun club or a slingback shooter, and then you can capture them with a net. New to the series are the morphing abilities, eight in all. You can morph into various characters, like a knight and perform a powerful attack or a gun fighter and shoot em up or a ninja and run along walls. You can also vehicles such as a race car to knock down the monkeys. Other features are the familiar Monkeypedia and the unlockable Mesal Gear Solid mini-game (a Metal Gear Solid spoof).

The apes escape on North American PS2s for a third time, and it will take more than a heroic kid with a simple net to trap them all before their mischief infects the minds of innocent folks around the world. Once again under the influence of the villainous Specter, siren-helmeted simians have invaded the local television station and begun to broadcast a signal designed to cloud the minds of viewers. Young Yumi and Kei must explore the station and round up all the rogue primates, before the damage is done. In addition to the regular compliment of ape-nabbing gadgets, the heroes can morph into special forms -- such as a ninja, a cowboy, or a chivalrous knight -- in order to take on whatever challenges those malicious monkeys throw at them this time around.