Alone In The Dark PS2 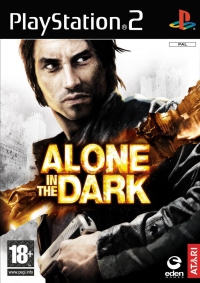 The PS2 and Wii versions of Alone in the Dark follow the same plot as the game developed for Xbox 360 and Windows by Eden Games, but were created by a different company with their own vision how the game should be implemented. Level structure, mechanics of gameplay, and looks of the characters (Sarah, especially) sometimes differ strongly as these versions contain concept elements that were left out of the other game. The driving sequences are almost entirely taken out. The first-person view is also mostly not used, and, for example, fire can be extinguished in the third-person mode. The basic aspects of screenplay are retained, but this can be considered another "what if" instalment in the series, rather than a canonical entry like the other version. The endings have a different look, but remain largely the same.

The series credited with spawning the survival-horror genre makes its PlayStation 2 debut with Alone in the Dark. Famed protagonist Edward Carnby finds himself in a modern-day New York City after being hurtled through time for reasons unknown. Carnby's memories are a blur, but he will need to quickly regain his faculties to deal with an ominous threat. A supernatural force has gripped the city, and Central Park is now infested with hideous monsters of ancient origin. Carnby will need every ounce of courage and skill to stay alive in an unfamiliar world.

While the genre is known for its deliberate pace and restrictive movement, this re-imagined Alone in the Dark offers more action-oriented encounters. Players can rappel down elevator shafts, shimmy across ledges, drive vehicles, and more. The storyline is divided into chapters, with each section culminating in a cliffhanger designed to keep players glued to the screen. The interface also takes a departure from previous survival-horror titles, removing health and ammunition bars and incorporating a real-time inventory system that involves selecting and storing objects in Carnby's well-pocketed jacket.

As players explore a police precinct, zoo, castle, and other areas found in and around Central Park, they will battle enemies and solve puzzles. Multiple solutions are available for each predicament, and items can be combined in different ways to create helpful tools or even weapons. Author Lorenzo Carcaterra, who penned the best-selling book Sleepers, helped collaborate on the game's scare-filled script. Both the PlayStation 2 and Wii versions of Alone in the Dark were adapted from the Xbox 360 and PlayStation 3 games by developer Hydrovision Entertainment, whose previous work in the genre includes 2008's Obscure: The Aftermath.