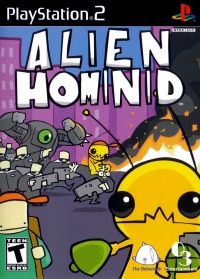 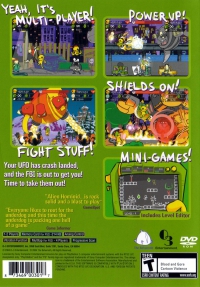 You're a little yellow alien. The FBI has shot down your ship while flying over planet Earth. And it, quite literally, lands right on their doorstep. After a series of FBI Agents swipe your ship, what option do you have other than to blow up everything in your path to get it back? Alien Hominid is a 2D side-scrolling shooter with heavy references to the Metal Slug series of games - from the hand-drawn graphics, huge explosions, right down to the ability to eviscerate FBI Agents when you get up close to them. The graphics are by featured artist Dan Paladin. Your goal, is quite simply, to get to the end of the stage, and die as little as possible. Which is made difficult due to the fact that any bullet is an instant kill. To help you out, you can grab a range of power-ups, such as lasers, spread shots, shotguns and more, as well as hijacking vehicles and using them for protection. Grenades can be lobbed, and you can jump on enemy shoulders and choose to bite their heads off if you like, or pick them up and throw them at other enemies. You can also dive underground for a short period of time to avoid enemies - while underground, you can drag agents into the ground to kill them.

In this latter-day platform shooter from unconventional publisher O~3 Entertainment, players make an emergency stop on the planet known as Earth -- to blast away nosy FBI agents, clueless humans, and just about anything else that moves. Based on the popular newgrounds.com Flash animation game by Tom Fulp (programming) and Dan "Synj" Paladin (character design), Alien Hominid casts players in the title role -- a cute little yellow extraterrestrial with a powerful ray gun, an itchy trigger-finger, and a dearth of patience for lower life forms.

Like the online "prototype," console versions of Alien Hominid feature a cartoonish, hand-animated, cel-shaded look, with lots of larger-than-life explosions and shamelessly violent sound effects. The alien can jump, duck, fire in all directions, and slice through opponents who get too close for a blast from his trusty zapper. The game's developers cite classic side-scrolling shooters such as Contra, Gunstar Heroes, and Metal Slug as inspiration, and this influence is easy to see in Alien Hominid's fast-paced action, relentless onslaughts of enemies, entertaining power-ups, and big boss battles.

YEAkJ
POW EV'
SHIELDS-ON'
GAM ES,I
pea
Level Editor
â€” (C' 00
Your UFO has crash landed,
and the FBI is out to get you!
Time to take them out!
"Alien Hominid...is rock
solid and a blast to play"
GameSpot
"Everyone likes to root for the
underdog and this time the
underdog is packing one hell
of a game'
Game Informer
1-2 Pla ers Memory Card (for -214 KB Analog Control
Vibration Function Multitap (for PS2) -4 Players Progressive Scan
0-3 ENTERTAINMENT, Inc. 3350 Scott Blvd. Suite 1201. santa Clara, CA 9515-4
@2004 0-3 Entertainment 0 2004 The Behemoth, All Rights Reserved.
The Behemoth
R 0M
Entertainment.
Blood and Gore
Cartoon Violence
Licensed by Sony Computer Entertainment America for play on PlayStation 2 computer entertainment systems with the NTSC U/C
TEEN
designation only. "PlayStation" and the "PS' Family logo are registered trademarks of Sony Computer Entertainment Inc. The ratings
icon is a trademark of the Entertainment Software Association. Manufactured and
printed in the U.SA. THIS SOFTWARE IS COMPATIBLE WITH PLAYSTATION 2
CONSOLES WITH THE NTSC WC DESIGNATION. US. AND FOREIGN PATENTS
PENDING.
8 73469 00301
ESRB RATING www.esrb.org