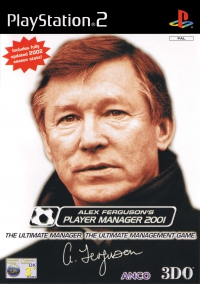 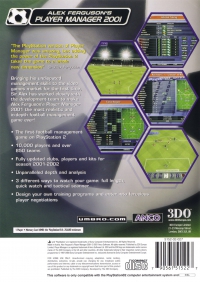 In this tactical football management game, you become the manager of a team in the English, French or Belgian league, with different subdivisions, starting in 2001. Your job includes setting out strategies, planning training sessions, keeping an eye on your players and attracting new talent, taking care of finances, and of course making sure that you win your matches. You will be given specific goals, such as qualifying for the champion's league, or defending the club's reputation. Games do not only include league matches, but friendlies and cup matches as well. The actual games can be watched real-time in 3D, allowing for on-the-fly substitutions and tactical decisions, and a unique feature is you can both manage and play for a club, although there is no way to actually control players or actively participate. All players have different abilities and characteristics, which can be trained to create a well-balanced team. The French version portrays manager Guy Roux (famous of Auxerre), while the UK version has Alex Ferguson (Manchester United).

ALEX FERGUSON'S
PLAYER MANAGER 200/
"The PlayStation version. ot
ger ornzrzjnrJJ
' r-NJYÃ¦r of the PJzy3%Jtjrurj 2
- % the to bYhjoJÃ¦
r-IjrnÃ¦nzjrun" 3ir Alex Fergusrun
JJvjrjrJ hjj3 Ijfjc]j3piLJtÃ¦r-J
Ã¦rrjerjb 4kjJJ3 to the yjr-Jeo
rur the first tjrrje,
Sir Alex has worked closely with
the development team to make
Alex Ferguson's Player Manager
2001 the most realistic and
in-depth football managementr
game ever!
â€¢ The first football management
game on PlayStation 2
â€¢ 10,000 players and over
850 teams
â€¢ Fully updated clubs, players and kits for
season 2001-2002
â€¢ Unparalleled depth and analysis
â€¢ 3 different ways to watch your game: full le gth,
quick watch and tactical scanner
â€¢ Design your own training programs and enter into ferocious
player negotiations
I Player â€¢ Memory Card (8MB) (for PlayStation@2): 2564KB minimum
Training
rum cua
U, 1 Liverpool 45
www.3DOEurope.com
3DO Europe Limited
21-23 Mossop Street,
London, SW3 2LY, UK
5152-02-027
7
and â€¢PlayStationâ€¢ are registered trademarks Of Sony Computer Entertainment Inc. All Rights Reserved.
Made in Austria. Alex Ferguson's Player Manager 2001 0 2001 Anco Sotnvare. All nghts reserved. Published by 300 Europe
Limited. Player Manager is a registered trademark ot Anco Software Ltd. 300 and the 300 logo are trademarks and/or semce
marks of The 3DO Company in the US and other countnes. All other trademarks to respective owners.Library
programmes 01997-2000 Sony Computer Entertainrnent Inc. exclustvely licensed to Sony Computer Entertainment Europe.
FOR HOME USE ONLY. Unauthorised copying. adaptation. rental. lending,
distribution. extraction. re-sale. arcade use. charging for use, broadcast, public
performance and internet. cable or any telecommunications transmission. access or
use ot this product or any trademark or copynqht work that forms part ot this product
are prohibited. Published by The 300 Company. Developed by The 3DO Company.
This software is only compatible with the PlayStation@2 computer entertainment system and