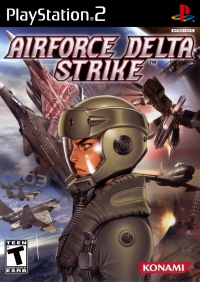 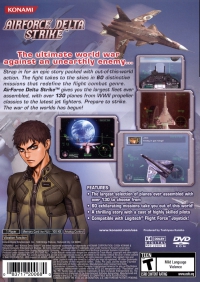 Fly with the 1st, 2nd, and 3rd Element squadrons as you defend country and, eventually, Earth itself from attack. Pilot aircraft that span sixty years of aviation including WWII prop planes, Korean War jets, rare prototypes, and even aircraft from previous Konami games like the Vic Viper and TwinBee. Between missions you can explore the base and talk to wingmates, buy new aircraft and special weapons, modify or repaint existing aircraft, and get mission briefings. Missions can have varied objectives, but any enemy crafts shot down will reward money used to buy, modify, and repair aircraft. While Ken Thomas is the main character of the game, other pilots can be used in missions as the game progresses, and using them can open up bonus missions as well as alter the story. The player can only play as Delta Squadron pilots, but the story is told from the perspective of both E.D.A.F.'s Delta Squadron and their O.C.C. Ace counterparts. Medals are awarded to each pilot as they reach milestones, such as number of enemy aces shot down or number of aircraft purchased.

KONAMI
91RFORCE DELTA
STRIKE
The ultimate world war
against an unearthly enemy*
Strap in for an epic story packed with out-of-this-world
action. The fight takes to the skies in 60 distinctive
missions that redefine the flight combat genre.
AirForce Delta StrikeTM gives you the largest fleet ever
assembled, with over 130 planes from WWII propeller
classics to the latest jet fighters. Prepare to strike.
The war of the worlds has begun!
i FEATURES:
Eneog range
The largest selection of planeswever assembled with
over 130 to choose from
â€¢ 60 exhilarating missions take you out ofthis world!'â€¢â€¢.
A thrilling story with a cast of highly skilled pilots
â€¢
Compatible with Logitech@ Flight ForcÃœ Joystick!
www.konami.com/usa
Produced by Toshiyasu Kamiko
1 Pla er Memo Card Anal Control
Vibration Function
Konami Digital Entertainment. Inc.. 1400 Bridge Parkway, Redwood City. CA 94065
DIGITAL
PRO LOGIC n
TEEN
DVD
R 0M
"KONAMIâ‚¬â€¢ and "Airforce Delta Strikew- are either registered trademarks or trademarks of KONAMI CORPORATION. 02004 KONAMI &
Konami Computer Entertainment Studios. All rights reserved. Lockheed Martin Trademarks used under license to Konami Corporation.
Produced under license from Boei Mana ement Company. Produced under a license trom Northrop Grumman Systems Corporation.
Produced under licence from BAE "TEM! PLC. Certain Aircraft names and destgns are protected by Trade Marks. copyright and other rights
owned bv BAE SYSTEMS PLC and its partners and are not to be re roduced except as permitted by the license without tne pnor written consent
of BAE SYSTEMS PLC. With support of JGSDF. JMSDF. and JASD% 02004 Logitech. All rights reserved. Logitech. the LOA9itech logo and
other Logitech marks are owned by Logitech and mav be registered. I other trademarks
are the property of their respective owners. Dolby. Pro Logic. and the double-D symbol
are trademarks of Dolby Laboratories. Manufactured under license from Dolby
Laboratones. Licensed by Sony Computer Entertainment America for lay on PlayStation
2 computer entertainment systems with the NTSC U,'C designation on . PlayStation- and
the "PS" Family logo are registered trademarks of Sony Computer Entertainment Inc. The
ratings icon iS a trademark o! the Entertainment Software Ass iati . Manufactured and
83717 20068 0
rinted in the U.SA. THIS SOFTWARE IS COMPATIBLE WITH VLAY!TATION 2
EONSOLES WITH THE Ulc DESIGNATION. U.S. AND FOREIGN PATENTS PENDING.
Mild Language
Violence
6B CONTENT RATING www.esrb.org