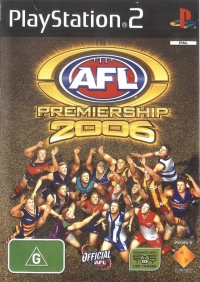 AFL Premiership 2006 is a simulation game only for the PlayStation 2 based on the AFL. The game was developed by Australian games developer IR Gurus and was published by Sony Computer Entertainment under the SCEE label. It was released on 20 July 2006 and is the tenth game in the AFL video game series. The game was only released in Australia. Commentary includes, Dennis Cometti, Dermott Brereton, and Christi Malthouse.[1]