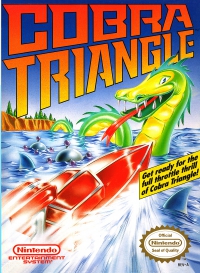 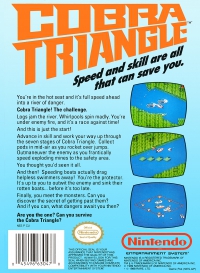 There are 25 stages in the game, including bonus stages. Each series of five generally contains one of each type of mission. The fifth are generally the boss stages. The bosses are a sea serpent (as seen on the cover), a giant crab, a giant squid, a red and black version of the sea serpent and a giant shark. The game uses a powerup bar similar to the Gradius series. Powerup pods are collected to move the selector to different powerup items. When the desired powerup is highlighted, the player can select it, after which the menu returns to an unhighlighted state. Menu options are "Turbo" (increase the speed of the boat), "Fire" (increase the number of bullets the primary gun fires), "Speed" (increase speed of shots and rate of fire), "Missile" (improves missiles) and "Force" (a force field around the boat plus replenished health). The speed boat used for game play starts with a single gun which can be upgraded to a quadruple spread shot. Missiles can also be added to the boat's arsenal and can be upgraded to heat-seekers. Between stages which are not connected by water, the Cobra Class has a helicopter style propeller that extends from the roof of the cabin. However, this flying state of the boat is never used in gameplay. The boat has a 12-point damage bar which can be reduced by contact with obstacles or enemy fire.

TBIIINJ}}
You're in the hot seat and it's full speed ahead
into a river of danger.
Cobra Triangle! The challenge.
Logs jam the river. Whirlpools spin madly. You're
under enemy fire, and it's a race against time!
And this is just the start!
Advance in skill and work your way up through
the seven stages of Cobra Triangle. Collect
pods in mid-air as you rocket over jumps.
Outmaneuver the enemy as you frantically
speed exploding mines to the safety area.
You thought you'd seen it all.
And then! Speeding boats actually drag
helpless swimmers away! You're the protector.
It's up to you to outwit the enemy and sink their
rotten boats... before it's too late.
Finally, you meet the monsters. Can you
discover the secret of getting past them?
And if you can, what dangers await you then?
Are you the one? Can you survive
the Cobra Triangle?
Official
NintendO
Seal of Quality
THIS OFFICIAL SEAL IS YOUR
ASSURANCE THAT NINTENDO'HAS
APPROVED THE QUALITY OF THIS
PRODUCT. ALWAYS LOOK FOR THIS
SEAL WHEN BUYING GAMES AND
ACCESSORIES TO ENSURE COMPLETE
COMPATIBILITY WITH YOUR NINTENDO
ENTERTAINMENT SYSTEM.'
NES P CU
45496 63047
8
Nintendo
EnTERTAtnrnenT SVSTEm'
NINTENDO IS A REGISTERED TRADEMARK OF
NINTENDO OF AMERICA INC.
TM 8 TRADEMARKS OF NINTENDO OF AMERICA INC.
0 1989 NINTENDO OF AMERICA INC.
â€¢ 0 1988 RARE. LTD.
Game Pak (NES-GP)