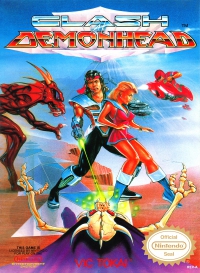 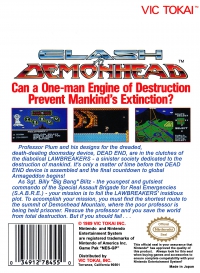 Clash at Demonhead is an open-ended platformer. The player takes control of Billy "Big Bang" Blitz, who is capable of running, jumping, and shooting. He is initially armed with a handgun, though various upgrades can be purchased from a shop. He later gains the ability to perform various powers by collecting Force, including shrinking, teleportation to previously-visited areas, flight, healing, and invincibility. The player chooses levels from a world map that consists of over forty routes. Various objectives must be met to complete the game.

Check out Professor Plum with the Doomsday Bomb at Demonhead! No, it's not Clue. It's Clash at Demonhead, an action platformer in which you take on the role of Billy "Big Bang" Blitz, racing through a collection of side-scrolling stages to save the world. Although the mechanics are similar to other platformers, the game's open-ended and non-linear design makes it a great choice for anyone looking for a replayable NES game. This simple cartridge offers more than just two-dimensional platform action - it also features an intricate plot that takes you across the world as you scour the stages for the medallions that can save the world from imminent destruction by the Doomsday Bomb.

VIC TOKAITM
Can a One-man Engine of Destruction
Prevent Mankind's Extinction?
p USH B
SELECT
e SELECT!
OU CAN SELECT
oures THAT you
HAYE PASSED
BY BEFORE.
Professor Plum and his designs for the dreaded,
death-dealing doomsday device, DEAD END, are in the clutches of
the diabolical LAWBREAKERS - a sinister society dedicated to the
destruction of mankind. It's only a matter of time before the DEAD
END device is assembled and the final countdown to global
Armageddon begins!
As Sgt. Billy "Big Bang" Blitz - the youngest and gutsiest
commando of the Special Assault Brigade for Real Emergencies
(S.A.B.R.E.) - your mission is to foil the LAWBREAKERS' insidious
plot. To accomplish your mission, you must find the shortest route to
the summit of Demonhead Mountain, where the poor professor is
being held prisoner. Rescue the professor and you save the world
from total destruction. But if you should fail. - -
Official
Nintendo'
Seal
34912 78455
01989 VIC TOKAI INC.
Nintendo and Nintendo
Entertainment System
are registered trademarks of
Nintendo of America Inc.
Game Pak "NES-GP"
Distributed by
VIC TOKAI, INC.
Torrance, California 90501
This official seal is your assurance that
Nintendo@ has approved the quality of
this product. Always look for this seal
when buying games and accessories to
ensure complete compatability with your
Nintendo Entertainment System?
Made in Japan