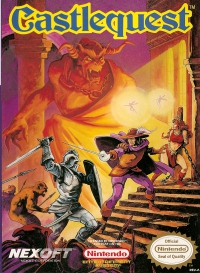 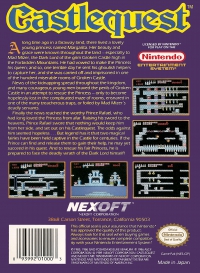 The object of the game is to navigate through Groken Castle to rescue Princess Margarita. The player can push certain objects throughout the game to accomplish progress. In some rooms, the prince can only advance to the next room by aligning cement blocks, Honey Jars, Candle Cakes, and Elevator Controlling Block.

The evil Mad Mizer has kidnapped the beautiful princess Margarita and is holding her in Groken Castle. After valiant, yet futile attempts by many brave knights, Prince Rafael heard of Margarita's plight and set out to rescue her.

In Castlequest, you take the role of Rafael as you search the 100 rooms of Groken Castle in order to save the princess. Each room consists of several doors of a certain color that must be opened with a key of a matching color. Keys are limited and must be used sparingly. Rafael has 50 lives with which to make it through all of the rooms, gaining an extra life for every 10,000 points. Points are earned by collecting the castle's many treasures. Jump and slash your way through any enemies that may impede your progress. Traps will get in your way as well, so be careful to avoid them.

Gastlequest
long time ago in a faraway land, there lived a lovely
young princess named Margarita. Her beauty and
grace were known throughout the land â€” especially to
Mad Mizer, the Dark Lord of the grim Groken Castle high in
the Forbidden Mountains. He had vowed to make the Princess
LICENSED BY NINTENDO
FOR PLAY ON THE
Nintendo
his queen; and so, one terrible day he sent his ghoulish helpers
svs-remn
to capture her, and she was carried off and imprisoned in one
of the hundred miserable rooms of Groken Castle.
News of the kidnapping spread throughout the kingdom,
and many courageous young men braved the perils of Groken
Castle in an attempt to rescue the Princess â€” only to become
hopelessly lost in the complicated maze of rooms, ensnared in
one of the many treacherous traps, or foiled by Mad Mizer's
deadly servants.
Finally the news reached the worthy Prince Rafael, who
had long loved the Princess from afar. Raising his sword to the
heavens, Prince Rafael swore that nothing would keep him
from her side, and set out on his Castlequest. The odds against
him seemed hopeless - But legend has it that two magical
fairies have been held captive in the Castle for centuries. If the
Prince can find and release them to gain their help, he may yet
succeed in his quest- to rescue his fair Princess, he is
prepared to face the deadly wrath of the Dark Lord himself!
NEXOFTT
NEXOFT CORPORATION
3868 Carson Street, Torrance, California 90503
Official
Nintendoâ€¢
Seal of Quality
3
This official seal is your assurance that Nintendo R
has approved the quality of this product.
Always look for this seal when buying games
and accessories to ensure complete compatibil-
ity with your Nintendo Entertainment System R.
0 1985, 1986 YOSHIDNKEISUKE IWAKURA. 0 1986
CORPORATION. 0 1989 NEXOFT CORPORATION. CASTLEOUEST Game pak (NES_GP)
AND NEXOFT ARE TRADEMARKS OF NE-XOFT CORPORATION.
93992 01000
NINTENDO AND NINTENDO ENTERTAINMENT SYSTEM ARE
TRADEMARKS OF NINTENDO OF AMERICA INC
Made in Japan