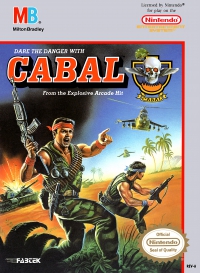 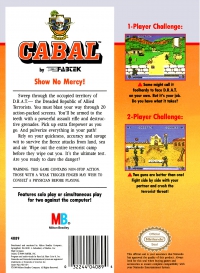 The player assumes the role of an unnamed commando trying to destroy several enemy military bases. The player's character is seen from behind and initially starts behind a protective wall (the wall can get damaged and shattered by enemy fire). The player must use a limitless ammunition gun and a limited number of grenades to fend off enemy troops and damage the base. An enemy gauge at the bottom of the screen depletes as foes are destroyed and certain structures (usually the ones that collapse when destroyed, rather than simply shattering) are brought down. At the successful completion of a level by fully depleting the enemy gauge, all the remaining buildings onscreen collapse and the player progresses to the next stage. Boss fights, however, start from the beginning if a player dies. (A feature criticised by many players. It can be circumvented, however, if two players play simultaneously and at least one stays alive at a given moment.) Power-ups appear from time to time, being released from objects destroyed onscreen. Some power-ups give special weapons: One of them is an extremely fast machinegun and other one is an automatic shotgun with a slightly lower firing rate, but has a larger crosshair, allowing it to strike a wider area with each shot. Others grant extra grenades or additional points. Two players could play this game, cooperatively, simultaneously. The arcade cabinet is a standard upright. Each player uses a trackball to move the player from side to side, and move the crosshairs about the screen. On later board revisions, a joystick was installed instead with an optional sub-pcb for use with a trackball. With a trackball, rolling (an invincible movement during which the player could not attack) is done by pushing the trackball to maximum speed.

An 8-bit translation of the Fabtek arcade hit, toy and board game company Milton Bradley presents Cabal for the NES. The Dreaded Republic of Allied Terrorists (D.R.A.T.) is planning a world-wide assault, and you're the lucky soldier called to prevent the attack before it begins. Armed with an unlimited supply of bullets and a finite number of grenades, you must attack a terrorist camp that is hidden away on a secluded tropical beach.

As you run from side to side, aiming your cross hair, you must kill terrorist troops and blow away buildings, cranes, ships, choppers, weapons, and planes. In the fifth and final level, you must destroy D.R.A.T.'s war machine. To help even the overwhelming odds, a friend can join in for two-player simultaneous action.

32244 04089
CABAL
Show No Mercy!
Sweep through the occupied territory of
D.R.A.T.â€” the Dreaded Republic of Allied
Terrorists. You must blast your way through 20
action-packed screens. You'll be armed to the
teeth with a powerful assault rifle and destruc-
tive grenades. Pick up extra firepower as you
go. And pulverize everything in your path!
Rely on your quickness, accuracy and savage
wit to survive the fierce attacks from land, sea
and air. Wipe out the entire terrorist camp
before they wipe out you. It's the ultimate test.
Are you ready to dare the danger?
WARNING: THIS GAME CONTAINS NON-STOP ACTION.
THOSE WITH A WEAK TRIGGER FINGER MAY WISH TO
CONSULf A PHYSICIAN BEFORE PLAYING.
Features solo play or simultaneous play
for two against the computer!
Milton Bradley
4
I-Player Challenge:
A Some might call it
foolhardy to face D.R.A.T.
on your own. But it's your job.
Do you have what it takes?
2-Player Challenge:
A
Two guns are better than one!
Fight side by side with your
partner and crush the
terrorist threat!
Official
NinTendo*
Seal
This official seal is your assurance that Nintendo
has approved the quality of this product. Always
look for this seal when buying games and
accessories to ensure complete compatibility with
your Nintendo Entertainment System.
4089
Distributed and marketed by Milton Bradley Company,
Springfield. MA 01101. A Subsidiary of Hasbro. Inc.
Made in Japan.
CABAL 01989 FAWFX. INC.
Program and audiovisuals by Rare Ltd [Rare Coin-lt. Inc.
Nintendo and Nintendo Entertainment System are registered
trademarks oi Nintendo of America Inc.
Game-m (NFSGP)
01989 Milton Bradley Company. All Rights Reserved. O