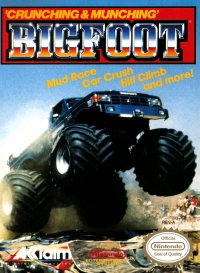 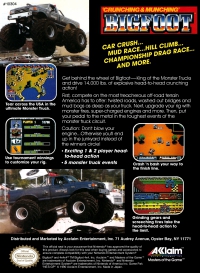 Bigfoot was a racing game released in July 1990 for the Nintendo Entertainment System. It was developed by Beam Software and published by Acclaim. The game was advertised by the legendary monster truck of the same name in the cartoon segment of the 1990 television show Video Power, titled The Power Team. The show also often used sound effects for the actions of not only Bigfoot, but others as well. The gameplay involves racing monster trucks including the title truck, Bigfoot (blue). The computer controlled trucks are green (The Growler) and yellow (The Charger) if the computer's truck runs out of money and cannot repair their rig. It was not uncommon for a skilled player to be challenged by three to four different monster trucks during the game. In two player mode the 2nd player's truck is red. The object of the game is to advance to the next level (race) with incurring the least amount of damage as possible. The levels consist of car crushing, mud bog, tractor pull, hill climb and the later levels are a combination of everything except the sled pull, simply called a drag race. To advance to the next event the player must complete a "cross country" race collecting money, points, etc. without damaging the truck.

#10304
NYC
Tear across the USA in the
ultimate Monster Truck.
PLAYER 1 smo
Use tournament winnings
to customize your rig.
CAR CRUSH...
MUD RACE...HILL CLIMB...
CHAMPIONSHIP DRAG RACE...
AND MORE.
Get behind the wheel of Bigfootâ€”King of the Monster Trucks
and drive 14,000 lbs. of explosive head-to-head crunching
action !
First, compete on the most treacherous off-road terrain
America has to offer: twisted roads, washed out bridges and
mud bogs as deep as your truck. Next, upgrade your rig with
monster tires, super-charged engines and more. Then, put
your pedal to the metal in the toughest events of the
monster truck circuit.
Caution: Don't blow your
engine.. .0therwise you'll end
up in the junkyard instead of
the winners circle!
â€¢ Exciting 1 & 2 player head-
to-head action
â€¢ 5 monster truck events
00620
00 VOO
Crash 'n bash your way to
the finish line.
Grinding gears and
screeching tires take the
head-to-head action to
the limit.
Distributed and Marketed by Acclaim Entertainment, Inc. 71 Audrey Avenue, Oyster Bay, NY 11771
Official
NinTend(j
Seal of Quality
This official seal is your assurance that Nintendo@ has approved the quality of
this product. Always look for this seal when buying games and accessories to
ensure complete compatibility with your Nintendo Entertainment System.@
Bigfoot@ and 4x4x4@ TM Bigfoot 4x4, Inc. Acclaim T"' and Masters of the Game TM
are trademarks of Acclaim Entertainment, Inc. Nintendo@ and Nintendo
Entertainment System@ are trademarks of Nintendo of America Inc. Game Pak
"NES-GP" 0 1990 Acclaim Entertainment, Inc. Made in Japan.
a ' nrnen'
Masters of the Game T"