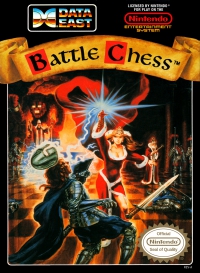 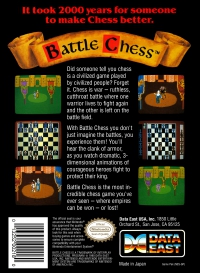 Battle Chess is a video game version of chess in which the chess pieces come to life and battle one another when capturing. It was originally developed and released by Interplay Entertainment for the Amiga in 1988 and subsequently on many other systems, including 3DO, Acorn Archimedes, Amiga CD32, Amiga CDTV, Apple IIGS, Apple IIe, Atari ST, Commodore 64, DOS, FM Towns, NES, Mac OS, PC-98, Sharp X68000 and Windows 3.x. In 1991, Battle Chess Enhanced was released by Interplay for the PC, featuring improved VGA graphics and a symphonic musical score that played off of the CD-ROM. Battle Chess was critically acclaimed and commercially successful, resulting in two official follow-ups as well as several inspired games. Its remake, Battle Chess: Game of Kings, was released on Steam (software) on March 16, 2014.

Chess as you never played before! Battle the computer in challenging games of chess where it's not Just a game ,but the life of all your pieces that remain on the line! Basic chess skills required to play. NES game.

It took 2000 years for someone
to make Chess better.
Did someone tell you chess
is a civilized game played
by civilized people? Forget
it. Chess is war â€” ruthless,
cutthroat battle where one
warrior lives to fight again
and the other is left on the
battle field.
With Battle Chess you don't
just imagine the battles, you
experience them! You'll
hear the clank of armor,
as you watch dramatic, 3-
dimensional animations of
courageous heroes fight to
protect their king.
Battle Chess is the most in-
credible chess game you've
ever seen â€” where empires
can be won â€” or lost!
â€¢ v. it:.F.:.â€¢::.â€¢
Official
Nintendoâ€¢
Seal of Quality
Data East USA, Inc. 1850 Little
Orchard St., San Jose, CA 95125
The official seal is your
assurance that Nintendoe
has approved the quality
of this product. Always
look for this seal when
buying games and acces-
sories to ensure complete
compatibility with your
Game Pak (NES-GP)
Nintendo Entertainment SystemP
BATTLE CHESS IS A TRADEMARK OF INTERPLAY
PRODUCTIONS. PROGRAM 0 1990 DATA EAST
USA, INC. NINTENDO AND NINTENDO ENTERTAIN-
MENT SYSTEM ARE TRADEMARKS OF NINTENDO
Made in Japan
OF AMERICA INC.