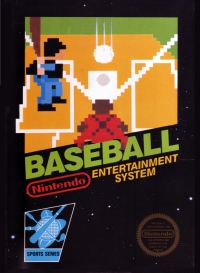 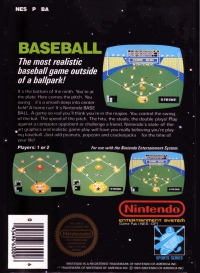 Baseball is a simple baseball video game made by Nintendo in 1983 for the Nintendo Family Computer, making it one of the first games released for the Famicom. It was later one of the NES's 18 launch titles when it was released in 1985 in the United States. As in real baseball, the object of the game is to score the most runs. Up to two players are supported. Each player can select from one of six teams. Although there is no difference between them other than uniform color, they are meant to represent the six members of the Japanese Central League.

Before modern graphics and officially licensed video games, 'RBI Baseball' for the NES was the most cutting-edge sports game on the market. Enjoy a burst of nostalgia with this Nintendo NES game created by Tengen. RBI Baseball has the distinction of being the first game supported by the MLB Player's Union. Choose from several different teams, including Detroit, St. Louis, Minnesota, and California with real players from the 1980s, including George Brett, Mark McGwire, and Jose Canseco. Because each player in the game has different stats, strategy plays a key role, such as stealing second base with Vince Coleman on first or throwing fastballs with Nolan Ryan to strike the other team out.

NES
BASEBALL
The most realistic
baseba// game outside
of a ba//par/d
It's the bottom of the ninth. You're at
the plate. Here comes the pitch. You
swing it's a smash deep into center
field' A horne runl It's Nintendo BASE
HOME RUN
STRIKE
BALL. A game so real you'll think you're in the majors. You control the swing
of the bat. The speed of the pitch. The hits, the steals, the double plays' Play
against a computer opponent or challenge a friend. Nintendo's stated the-
art graphics and realistic ganne play will have you really believing you're play
ing baseball. Just add peanuts, popcorn and crackerjacks for the time of
your life!
Players: 1 or 2
For use with the Nintendo Entertainment System.
STRIKE
STRIKE
.NinTendo
EnTERTAtnmenT SYSTEri1
Game Pak ( NES-GP)
SPORTS SERIES
NINTENDO IS A REGISTERED TRADEMARK OF NINTENDO OF AMERICA INC.
"v' TRADEMARK OF NINTENDO OF AMERICA INC @ 1985 NINTENDO OF AMERICA INC