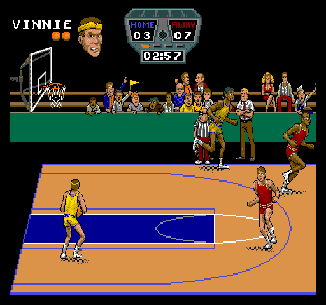 Arch Rivals is a basketball arcade game released by Midway in 1989. Billed by Midway as "A Basket Brawl", the game features two-on-two full court basketball games in which players are encouraged to punch opposing players and steal the ball from them.

Arch Rivals allows players to select from a variety of fictional teams (although arcade operators can change the team names to reflect real ones) and players. One playable character, "Tyrone" was also featured in the animated Power Team segments of the television series Video Power. Home versions of the game were released for the Nintendo Entertainment System, the Sega Genesis/Mega Drive as well as the Game Gear. Emulated versions of the game were included in the compilations Midway Arcade Treasures 2, Midway Arcade Treasures Deluxe Edition, and Midway Arcade Origins.

The game has been considered a forerunner to Midway's popular arcade basketball game, NBA Jam.

Have you ever been on the basketball court and gotten so frustrated that you wanted to just slam your opponent to the ground? If so, get yourself into therapy and then get your hands on ARCH RIVALS, because this is the game where you can do whatever you want on the court. There aren't any rules in this brand of basketball, so anything goes and it will as you utilize your hoops skills as well as your body-slamming abilities to win the game and celebrate a victory. Of course, you'll have to pass, shoot, rebound, and dribble, but you'll also get the chance to knock your rival down, drop his shorts, and push him out of the way. This game isn't for those primadonnas who rely on the referees to rescue them from their big, tall opponents; ARCH RIVALS is more aptly titled "basketbrawl"!

Basketball without the rules; one or two players; pick your team from among a talented roster of players; show off your basketball skills and your brawling abilities; based on the arcade hit